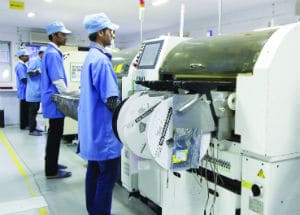 February 4, 2015: Starting from scratch and building a self-sufficient enterprise is not an easy task. For any enterprise, growth in terms of revenue and expansions is a big achievement. The company has achieved a lot since it started its operations in 1994

Located in Mahape, Maharashtra, Vital Electronics & Manufacturing Co, an electronics manufacturing services (EMS) company, offers cost-effective turnkey operations for electronics assemblies of the best quality. The company’s services cover engineering, procurement, assembly, testing and final assembly. The company uses cutting edge technology for design and development, and is backed by a skilled workforce. Vital Electronics & Manufacturing Co is a partnership firm started by M V Maroo, who looks after the technical aspects of the business and R K Kapur, a partner in the company.

The journey so far

Vital Electronics & Manufacturing Co was established in 1994 and production began in 1997. The initial investment to procure land, buildings and machinery was approximately Rs 30 million. Since the company was a new enterprise, it achieved a modest turnover of about Rs 2.5 million in the financial year 1998-1999. However, in 2013-14, it registered revenue of over Rs 260 million. Speaking about the company’s journey, R K Kapur says, “We started with an SMT line, manual insertion and an ICT machine. Our experience with Philips India in assembling its TV boards and DVD players gave us the confidence that we were moving on the right track. We benefited from Philips’ process knowledge that the global giant had built up over the years.” Emphasising the importance of customers, R K Kapur asserts, “There is nothing more important for any firm than its customers. Our customers have been our driving force and we have grown with them,” he adds.

As the saying goes, failures are a stepping stone to success and Vital Electronics has proved that. The company initially had to face a lot of obstacles. Highlighting the biggest hurdle that the company faced during the initial stages, R K Kapur shares, “Arranging for and procuring funds to run the business was a mammoth task and just like others, we faced it too. Convincing bankers to finance our working capital requirements was a difficult task. Since Vital was a new company, the banks obviously were nervous about giving loans to it. An interest rate of over 18 per cent was what we had started with and for us, it was really high at that point of time.” Apart from this, the company also faced severe fund flow issues and the recoveries were also not up to its expectations.

However, these barriers motivated R K Kapur, as he treated them as a challenge to do something better in the future. According to him, the company has never faced any failure. “Of course, there were several major deterrents but there were no failures. That is what gave us the confidence to do bigger and better things.” Regarding prospects for new ventures, R K Kapur said, “With the current government’s focus on ‘Make in India’, we see the defence sector as the biggest opportunity. Also, our proximity to Mumbai’s Santa Cruz airport and the JNPT port as well as the proposed Navi Mumbai airport will give us an edge for exports.”

Starting from scratch and building a self sufficient enterprise is not an easy task. For any enterprise, growth in terms of revenue and expansions is a big achievement. The company has achieved a lot since it started its operations in 1994. Vital Electronics & Manufacturing Co is now a full-fledged entity that offers the best services to its customers. It has state of the art infrastructure and advanced technological aids. The company currently supports high- and low-mix PCBs for volumes that range from just a few units for prototypes and modest quantities for pre-production, right up to millions and billions in volume production. The company has achieved a lot in a span of 20 years. Today, it sources components from all over the world, whereas the component forming and insertion takes place in-house.

Vital Electronics believes in constantly improving and evolving with technological advancements. Talking about the areas in which the company needs improvements, R K Kapur shares, “Our achievements have been in increasing our production capacity many times over by fine tuning the manufacturing process, and the upgradation to automatic component placement machines. We strive to provide the best-in-class infrastructure and working environment for our employees. As of now, I think the company can work further towards offering a ‘better than the best’ working environment to its employees, in terms of housekeeping and laying more emphasis on creating a more healthy environment.”

The company believes in constantly improving on processes and innovation to offer better products and services at a reduced price. It always advocates healthy competition and strives to offer zero defect products and services, along with timely deliveries. “We encourage competition as it helps bring in more business. We believe in a win-win situation wherein the customer and manufacturer both benefit. If we can increase productivity by 10 per cent, then the revenue gained due to this addition is shared,” says R K Kapur.

Vital Electronics boasts of a best in class infrastructure. It is equipped with the latest machines and equipment, which adds to the competencies of the company. It has one manufacturing facility, which is a two storey building with a production area of 1625.8sqm. It has the capabilities to offer its clients the entire production process as a service, from sourcing to a fully tested product. The company also boasts of PCB stuffing lines, and component forming with an ESD protected shop floor. Also, it has a state of the art wave soldering facility for bulk production of PCB assemblies. The company also has new generation lead free SMT lines among other technologically advanced machines.

Talking about the machinery in the plant, the company is working towards replacing its assembly machines. “All the machines that are four years and older are set to be replaced,” says R K Kapur. The company’s expansion strategy is to focus on optimum utilisation of its existing floor space by improving process cycle time, and using new generation machines that ensure better productivity with the existing footprint. Currently, Vital Electronics is focusing on large volumes with low value or low volumes of high value. Regarding the expansion plans of the company, R K Kapur says, “We plan to upgrade the existing facility because the new generation machines will have better placement accuracy and faster speeds.”

- Advertisement -
Previous articleNothing is more satisfying than seeing the wonderful results of your efforts, says Vikram Desai
Next articleTejas, Tessolve and Bosch to invest Rs 26 billion in electronics manufacturing