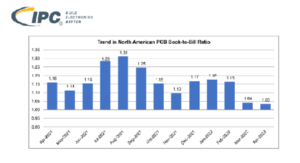 “PCB shipments have been marginally stronger than bookings through the first four months of the year. Shipments are up 6.7% compared to a decline in bookings of 2.6%,” said Shawn DuBravac, IPC’s chief economist. “The disconnect between shipments and orders is likely driven by backlogs for other components. Companies are disinclined to place PCB orders if they are waiting on other components. Despite strong shipments, the book-to-bill remains above 1.”

The book-to-bill ratios are calculated by dividing the value of orders booked over the past three months by the value of sales billed during the same period from companies in IPC’s survey sample. A ratio of more than 1.00 suggests that current demand is ahead of supply, which is a positive indicator for sales growth over the next three to twelve months. A ratio of less than 1.00 indicates the reverse.

Year-on-year and year-to-date growth rates provide the most meaningful view of industry growth. Month-to-month comparisons should be made with caution as they reflect seasonal effects and short-term volatility. Because bookings tend to be more volatile than shipments, changes in the book-to-bill ratios from month to month might not be significant unless a trend of more than three consecutive months is apparent. It is also important to consider changes in both bookings and shipments to understand what is driving changes in the book-to-bill ratio.

IPC’s monthly PCB industry statistics are based on data provided by a representative sample of both rigid PCB and flexible circuit manufacturers selling in the USA and Canada. IPC publishes the PCB book-to-bill ratio by the end of each month.

Renesas Partners with Tata to Accelerate Progress in Advanced Electronics

Drone Survey To Monitor Drains in UP

Nishchay Pandey - July 1, 2022 0
In an innovative attempt to utilise and apply cutting-edge technology, the Uttar Pradesh government has initiated a drone survey that will be executed as...

Garuda, a Start-up Working On Drones For Delivery

Nishchay Pandey - July 1, 2022 0
In the increasingly competitive war between delivery apps, Swiggy recently unveiled what could be their most efficacious weapon yet: a partnership with Chennai-based drone...

Nishchay Pandey - July 1, 2022 0
The agrochemical industry has stressed the need for large-scale application of drone technology for spraying pesticides, the Centre has asked them to work alongside...

Nishchay Pandey - June 30, 2022 0
Samsung Electronics Co Ltd announced on Thursday it has commenced the mass-production of chips with advanced 3-nanometre technology, the first to do so, as...

Foxconn to Invest in Semiconductor and Consumer Electronics in India

Nishchay Pandey - June 30, 2022 0
Foxconn plans to invest big in India, and there is a fierce competition raging between Indian states to woo the Taiwanese electronics giant. The...

Drone Survey To Monitor Drains in UP