Global cellular IoT module shipments are expected to cross 1.2 billion units by 2030 with a CAGR of 12%, according to the latest Global Cellular IoT Module Forecast from Counterpoint Research. The shipments will be mainly driven by 5G, NB-IoT and 4G Cat 1 bis technologies. 5G will be the fastest growing (60%) technology, followed by 4G Cat 1 bis, during 2022-2030.

With 5G becoming mature, we will see large module vendors such as Quectel, Fibocom, MeiG, Foxconn, Thales, Telit and Sierra Wireless consolidating their positions in the global cellular IoT module market. Longtail module vendors will struggle with scale and partnerships.

Commenting on the market dynamics, Senior Research Analyst Soumen Mandal said, “With the ongoing sunset of 2G and 3G networks across the world, most of the demand has been shifting to LPWA, 4G Cat 1 and 4G Cat 1 bis technologies until now. NB-IoT will still remain popular in parts of Asia, including China, and Europe, while 4G Cat-1-based modules proliferate over the next few years.

The rollout of 5G and introduction of 5G RedCap in coming years will see the adoption of 5G across intelligent IoT applications in industrial, asset tracking, POS, telematics, healthcare and wearables segments, mostly replacing traditional 4G IoT applications. We estimate that cumulative 5G shipments (excluding 5G RedCap) will reach 2.5 billion units, growing at a CAGR of 60% between 2022 and 2030.

By the end of this decade, we should see the introduction of 6G technology for IoT. However, 6G will be limited to higher-end applications such as enterprise and broadband in the initial years of adoption.” 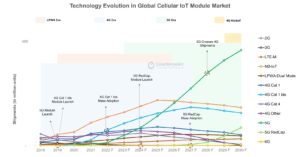 Commenting on the cellular IoT module application landscape, Vice-President Research Neil Shah said, “Smart meter, industrial, router/CPE, automotive and POS will be the top five applications in 2030 in terms of shipments. 5G will be preferred for Industrial 4.0 (like robotics, automation and digital twins), router/CPE (like FWA and private networks) and automotive (like connected and autonomous mobility) applications, LPWA will be preferred for utilities (smart meter) and 4G Cat 1 bis and 5G RedCap for POS applications.

China leads in 5G adoption in the global cellular IoT module market. However, North America and Europe will have great potential in the future. 5G adoption in emerging markets such as India and Latin America will also grow faster and 5G RedCap may become popular in these regions.”