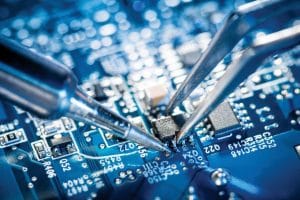 India is one of the fastest growing markets for electronics in the world. There is potential to develop the electronic system design and manufacturing (ESDM) sector to meet India’s domestic demand as well as build capacity to export. The National Policy on Electronics (NPE) aimed to address the issue with the explicit goal of transforming India into a premier ESDM hub. The policy, however, is encountering a few government-made roadblocks and could do with a revamp. Here are some suggestions from ELCINA

The National Policy on Electronics (NPE) was launched in 2012 to create an indigenous manufacturing ecosystem for electronics in India. The policy also aimed to foster the manufacture of indigenously designed chips to create a more secure ecosystem in the country. The policy envisaged that a turnover of US$ 400 billion by 2020, from local electronics manufacturing, would create employment for two million people.
The policy points were well circulated among industry stakeholders by the government as well as industry associations like Electronic Industries Association of India (ELCINA) at various global platforms over the last four years. Recently, the government has decided to put some of the action points in this policy on hold, considering the financial burden associated with them. However, according to ELCINA, doing this may convey a very negative image of the country and give the impression that India is no longer a viable investment destination for electronics manufacturing. ELCINA has, therefore, suggested a few points to revamp the policy rather than curtailing it. These suggestions may encourage the electronics industry while mitigating the financial burden on the government. ELCINA’s suggestions are collated below.

Suggestions on how to revamp the schemes under the NPE
The Modified Special Incentive Package Scheme (MSIPS) and the electronics manufacturing clusters (EMC) schemes are the two pillars of NPE 2012 that have successfully attracted investments in the electronics manufacturing sector. Implementation of both the schemes has been put on hold since early 2016, ostensibly due to questions from the Finance Ministry regarding their effectiveness and the financial burden imposed on the government’s resources.

Other recommendations made by ELCINA
a) Cover all ICT and electronic products under a preferred rate in the GST regime, and reduce CGST to 6 per cent on inputs used in manufacturing ITA-1 products.
b) Set up a venture capital fund for the ESDM sector with the necessary steps to attract low cost investments in electronics manufacturing. Total investments in the electronics industry are envisaged to be US$ 100 billion. This will remain a remote possibility, unless a venture capital fund exclusively for investing in electronics manufacturing units is established and contributors to this fund are offered a tax pass through benefits on dividend income as well as capital appreciation. Indian HNIs and NRIs must be invited and encouraged to invest in this fund.
c) Promote ‘Make in India’ by imposing the peak rate of customs duty on non-ITA-1 items that are at zero duty. Further registration of goods must be made mandatory under BIS/IEC norms under the compulsory registration order 2012, which is already in operation, and this must be expanded to include more ESDM products.

Mitigating the cost of disabilities
In India, the high cost of finance, power, logistics and the regulatory and procedural problems add to disabilities, which are typically estimated at 8-10 per cent of manufacturing costs for components and any high value added items in the ESDM sector. The disability increases with value addition, in step with increasing exposure to domestic resources. The following methods have been recommended to mitigate these disabilities and enable higher investments and value addition.

Continue all differential duty benefits and concessions under the GST regime
Consistency in tax policy is very important for attracting investments. The differential excise duty structure as provisioned in the Union Budget 2015-16 on mobile handsets and tablets has met with an encouraging response from the industry. Many companies have set up manufacturing facilities for mobile handsets while some have taken the EMS route for domestic manufacturing. Following this success, its scope was widened to cover mobile chargers, battery packs, speaker headphones and specified CPEs, including CCTVs, DVRs/NVRs, and set-top boxes in the Union Budget 2016-17.
ELCINA recommends the following:

Rethink needed in the ‘security and surety’ clause in IGCRDMEG 2016
The recently amended IGCR rules (Import of goods under concessional rate of duty for manufacture of excisable goods—IGCRDMEG 2016) have created a serious anomaly and hindrance for manufacturers of electronic components. The amended rules require that‘security and surety equal to the amount of exemption availed has to be provided by the importer/manufacturer.’
This clause of‘security and surety’was not part of the earlier rules (IGCR-1996), as importers were and still are bound to submit a continuity bond. Manufacturers are now facing very serious problems in releasing their import consignments and arranging a ‘third party surety’is almost impossible, while the security clause results in blockage of costly and scarce working capital.
In IGCR-1996, there was a requirement only for the continuity bond/undertaking by the manufacturer/importer. Thus the recent amendment has made the process more tedious. It is recommended that the requirement of security and surety may be deleted with immediate effect, and the continuity bond may be retained if it is not possible to waive it as well.