The Centre has notified the Rs 76,000 semiconductor incentive policy which it recently approved with the aim of establishing the chipmaking ecosystem in the country.

Companies, Consortia or Joint Ventures proposing to set up a Silicon CMOS based Semiconductor Fab in India for manufacturing Logic / Memory / Digital ICs / Analog ICs / Mixed Signal ICs / SoCs will be able to avail the incentives.

As per the notification, the government will provide up to 50 percent of Project cost for two semiconductor and two display fabs in the country. The Application window starts January 1 and will be open for 45 days. Support under the scheme shall be provided on pari-passu basis for a period of six years. 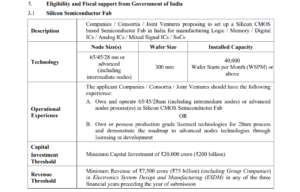 Additional support of infrastructure will be provided through EMC2.0 scheme, demand aggregation, support for R&D, Skill Development and Training along with support offered by the State Government if any.

For compound fabs and ATMP facilities, 30% of the Capital Expenditure will be reimbursed and tenure of the scheme will be three years starting from January 1.

Up to 2.5% of the outlay of the scheme shall be earmarked for meeting the R&D, skill development and training requirements for the development of semiconductor ecosystem in India.

“The Scheme aims to attract investments for setting up Compound Semiconductors / Silicon Photonics (SiPh) / Sensors (including MEMS) Fabs and Semiconductor ATMP / OSAT facilities in the country to strengthen the electronics manufacturing ecosystem and help establish a trusted electronics value chain in the areas of application of these fabrication and packaging technologies,” the government said.

It also said that Design Linked Incentive (DLI) scheme shall offer financial incentives as well as design infrastructure support across various stages of development and deployment of semiconductor design for Integrated Circuits (ICs), Chipsets, System on Chips (SoCs), over a period of 5 years and will nurture close to 100 domestic companies of semiconductor design and facilitate growth of not less than 20 such companies to achieve turnover of more than ₹1500 Crore in the next 5 years.

The government announced the policy to incentivize companies to set up chip manufacturing and design facilities in India. The funding will be provided over a period of six years and close to 20 units across different areas are expected to be set up over the next two years.