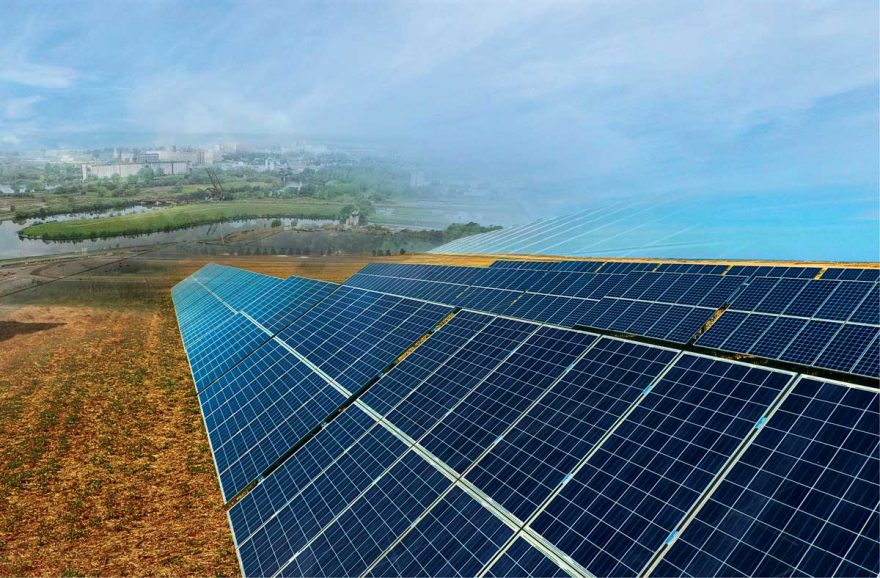 The Indian renewable energy sector has grown tremendously in the last five years. The solar energy sector, in particular, has grown exponentially, with India soon to become the third largest international solar market after China and the USA. Both by total installed capacity and annual capacity addition, India is now amongst the top five countries on the world’s renewable energy map.

A survey by Wood Mackenzie on the global energy markets, which focuses on the upcoming market shifts, concludes that global demand for energy will keep rising till 2035. However, the nature of the energy mix, the demand centres and the key players will change significantly. The report also indicates that energy demand in India will grow the fastest, at an annual average rate of 3 per cent from now to 2035, by which time the country’s population will overtake China’s.

Considering the ever-increasing gap between the power generated from conventional sources and the country’ actual energy requirements, solar energy is going to play a major role in India’s energy sector. Therefore, solar power, despite the challenges, offers huge opportunities.

The market, at a glance
According to a Bridge to India (BTI) report, total installed utility-scale solar capacity in the country grew by over 70 per cent in 2017-18 to reach 21.3GW. Total solar capacity, including rooftop solar and off-grid systems, reached 24.5GW as of March 31, 2018.
Total utility-scale solar capacity is now more than the capacity of all other renewable sources combined (4.6GW of geothermal energy and 1.7GW of wind power). The year was notable for the exponential growth in the open access market, where 1.7GW of new capacity was added, up 275 per cent over the previous year. Karnataka added 4.1GW of new solar capacity in this period and surpassed Telangana, Rajasthan, Andhra Pradesh and Tamil Nadu to become India’s top solar state.

Adani is the top project developer with 1.12GW of capacity commissioned, followed by Renew and Acme (Figure 2). NLC and Acme lead the pipeline capacity followed by Azure, ReNew and Softbank. Four players – Hero, Suzlon, Shapoorji Palloonji and Skypower — feature in the top ten list of developers, for the first time.

Domestic module manufacturing volume in the first quarter of 2018 was 821MW, up by 19 per cent over the previous quarter. Mundra (200MW), Vikram Solar (166MW) and Waaree (84MW) were the top three manufacturers.

Amongst module suppliers, Canadian Solar led the charts with a 12.9 per cent market share followed by JA Solar (11.4 per cent) and Trina Solar (7.9 per cent).

ABB continues to dominate the inverter market with 20 per cent market share. However, it is closely followed by Huawei (17 per cent), which has climbed up from tenth place last year. Sungrow and TMEIC (a collaboration between Toshiba and Mitsubishi Electric) follow with market shares of 14 per cent and 11 per cent respectively.

A highly competitive market
The wide scale adoption of solar energy and the sharp decline in solar module prices in the global market (a trend that has been continuing since last year) due to a supply glut have resulted in a sudden fall in solar power tariffs in the country, leading to competitive auctions in the market.

The government has reasons to be pleased that auctions have halved the cost of renewable power in just three years. Indeed, both solar and wind power are now by far the cheapest new sources of power with current prices in the range of ₹ 2.40 – ₹ 2.80 per unit. This has spurred demand from discoms as well as bulk energy consumers such as the Railways, IT companies and auto ancillary units. The flip side of fiercely competitive auctions is that the urge to win tenders at any cost has led to aggressive bidding. There have been persistent fears that tariffs have gone down too far, too fast. The government needs to build safeguards in auction mechanisms to ensure that projects are delivered on time, that quality is not compromised and the banks are not saddled with NPAs as seen in other sectors.
Falling solar power costs are partly due to falling module prices, based on the rise of China in the global module manufacturing business. India, like much of the world, is heavily reliant on Chinese manufacturers, who have aggressively scaled up capacity and invested in R&D to account for more than two-thirds of the global supply of modules. Indian manufacturers are unable to compete with their Chinese counterparts and that is fuelling tension between domestic manufacturers and project developers.

Falling tariffs are a double-edged sword for the sector. These make solar power more attractive for consumers but are also making investors and lenders jittery. In the near term, these tariffs are also creating uncertainty amongst policy makers as well as new risks for older projects auctioned at tariffs that are two to three times higher.

The sharp reduction of tariffs may commoditise the Indian solar market rapidly, and profit margins are bound to be squeezed across the value chain. Therefore, solar players need to innovate with new technologies and business strategies to survive in this ultra-low tariff scenario.

Policy safeguards for manufacturers
India, being a lucrative solar power market, attracts both global and local investors. However, the country is far from attaining self-reliance in solar module manufacturing. Recently, the Directorate General of Trade Remedies (DGTR), Ministry of Commerce and Industry, has issued a final decision on the safeguard duty petition by domestic cell and module manufacturers. It has imposed a safeguard duty on imports of all cells and modules, irrespective of technology, for the next two years, starting July 30, 2018 – 25 per cent in the first year, falling to 20 per cent and 15 per cent in the subsequent six-month periods, respectively. The duty will be applicable to imports from China, Malaysia and all developed countries. Imports from other developing countries have been exempted as they individually account for less than 3 per cent of total imports into the country.

However, this may not have a meaningful sustainable impact on domestic manufacturing because of the short period and no relief for SEZ (special economic zone) units. Moreover, the duty may pose financial and execution challenges for all ongoing projects and adversely impact government plans for the solar sector. Due to the extremely short time frame, this policy may not be able to encourage any new investments or allow existing manufacturers to upgrade their facilities.

The Indian government also appears to be drafting a new scheme to support domestic manufacturing without violating WTO trade rules. The scheme involves procuring 12GW of new project capacity using domestically manufactured modules over the next four years. The scheme is in the final stages of approval, and will help the local solar manufacturing industry withstand the onslaught of cheap imports. As part of the scheme, Central government public sector undertakings will call for tenders for setting up solar power projects, and the electricity generated through these will be used for their own consumption.

The implications of ‘one nation one tax’
In accordance with the ‘one nation one tax’ policy, a concessional rate of GST at 5 per cent has been applied on solar modules and cells. This decision (as against the effective 0 per cent rate of taxation) will certainly increase the total project costs.

However, the increase in project costs may be subsidised by the decrease in the overall total cost on account of the following:

The same GST rate of 5 per cent has been extended to all equipment for solar power generating plants and to other capital goods used in solar projects. However, there is still a lack of clarity regarding these ‘other’ capital goods used in solar projects. There is confusion in the market on how to avail of the concessional 5 per cent GST rate when many of the same components are taxed at higher rates for use in other industries. For example, transformers used for solar projects are intended to be taxed at 5 per cent but they are taxed at 18 per cent for other applications.

In the absence of any specific notification for solar projects, the GST rates vary from 18 per cent for capital goods such as inverters and module mounting structures, to 28 per cent for cables and batteries. According to BTI estimates, if all capital goods for solar projects are taxed at the 5 per cent rate, the overall increase in EPC costs will be around 3 per cent. If, however, only modules are taxed at 5 per cent and other capital goods are taxed at rates between 18-28 per cent, the net increase in EPC costs is expected to be around 6 per cent.
With global solar module prices firming up this quarter due to the extension of the solar FIT (feed-in tariff) deadline in China, the GST has come at an unfavourable time for the solar sector in India. Project delays can be expected and one cannot rule out the risks of litigation between project developers and discoms over the sharing of additional costs. The adverse impact will also be felt in the rooftop solar market, where activity is expected to slow down in the near future.

Moving forward
Solar power as a clean energy technology option has already exceeded expectations several times over, and this trend could continue. However, availability of grid-scale energy storage is critical to ensure sustainable growth of this sector. Therefore, it’s the energy storage industry that could boost the growth of solar power by delivering cheap yet reliable storage in the next few decades.