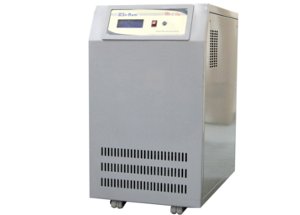 Saturday, October 26, 2013: Power failure is a major concern in user applications where uninterrupted power supply is imperative. One of the major concern areas in this regard is the erratic power supply to lifts/elevators during incessant power outages. Commuters feel helpless in situations when they are left immobile due to sudden power cuts. It seems to be a major hindrance to the smooth flow of activities in multiple establishments which cannot function without the smooth functioning of elevators.

With the ever rising number of high rise structures in cities for residential purposes, offices, manufacturing plants, shopping malls, schools and colleges, the availability of power to run lifts is a crucial necessity.

The 3 phase bidirectional lift inverter is highly suitable for industrial and commercial businesses, buildings, IT environments where same supply side is used for other sensitive loads. Su-Kam offers the Sturdy Power Series of 3 phase bidirectional lift inverters with the capacity of 5 KVA/96VDC and 10KVA/180 VDC with integrated battery current rating setting for 70AH/150AH/200AH.

·The 3 phase bidirectional inverters are made in accordance with the norms that ensure electrical equipments must be eco-friendly and should not pollute the mains supply.

·This is a complete power generation system that is suitable for all types of commercial establishments and is capable of running Lifts and Elevators in the most cost effective manner.

Features of the lift inverter:

In the event of an electricity failure, the lift inverters’ Static switch feature ensures negligible change over time and improves synchronization during change over between Mains to Inverter and Inverter to Mains for smooth running. This is carried out within few milli-seconds for smooth running of the lift. Once the main supply is resumed, the lift is switched over to it.

The lift inverters are made with advanced technology that provides sufficient electrical backup support to the emergency lift operating systems. The inverter provides synchronization on AC to Load which is useful for operation during change over.

These lift inverters are highly efficient with intelligent DSP based control and reduces cost of the system as separate charger card is not required. This further reduces size, cost, and weight and improves functionality of the system. The deep discharge battery charging technology feature of the inverter improves battery life.

As the Su-Kam Lift inverter has good Input Current THD during charging, it does not pollute the mains which is feeding to other equipments. This enhanced technology also helps in reducing electricity bills in countries where Electricity Bill charges for Apparent Power. The Inverter can handle large peak currents required for starting the motors in Lift inverters.

User Friendly Display with auto scroll of the parameters on display as per running modes of the system i.e. Inverter or Charger mode and status/alarm is present which is a significant aspect of the inverter.

“Frequent power cuts and irregular power supply affects our daily lives and makes it very difficult for us to carry on with our day-to-day activities” says Mahboob Khan from Ahmad Hospital in Gurgaon, who believes that the only way to resolve this problem is to resort to the alternative sources of power that could support all the electrical equipments including lifts during power failures.

One such alternative source of power is ‘lift inverter’ and in order to solve power related issues, Ahmad Hospital (sector-15, part-2, Gurgaon) has recently installed a lift inverter to get uninterrupted power supply to run the hospital lifts.

Speaking on the same, Mahboob Khan says, “Lift inverters installed by Su-Kam offer great efficiency and negligible time lag between a power cut and power back up supply. We needed an effective solution to frequent power cuts especially for the lifts used by the patients in our hospital and we are extremely satisfied with this product from Su-Kam. In case of emergencies, we no longer have to be worried that patients will have to suffer from erratic power supply that might affect the smooth movement of lifts.”