The rapid upheaval of technology and storming fast internet has led to an enormous growth in the number of smartphone users in India. The unprecedented demand for smartphones in India has made it the second largest smartphone market in the world.

The latest forecast by eMarketer, the US-based market research firm, suggests that more than a quarter of India’s population will be using smartphones by the end of this year.

Despite sluggish pace in shipment volume of smartphone units, the smartphone users will continue to rise in India. The number of smartphone users in India is expected to grow by 15.6 percent to reach 337 million in 2018, according to the report. Surprisingly, it is the highest estimated growth rate posted by any country in the world. The key factors behind this growth are the upsurge in smartphone usage and the demand for more affordable smartphones in urban areas.

Here are main highlights of the report: There is a vast opportunity for smartphone makers as 3/4th of 1.3 billion Indian people are yet to feel the smartphone vibe. The competitively priced high-specced devices have lured a lot of Indians to buy their first smartphone. The smartphone penetration in India is bound to increase as it has become one of the most promising markets for the OEMs. 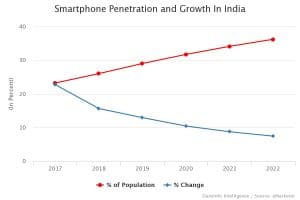 Yet there are some hurdles in India’s path. “India still faces technological challenges that are holding back mass smartphone adoption“, said Chris Bendtsen, senior forecasting analyst at eMarketer.

Smartphone Users In India: The Challenges

The slow speed mobile internet is another problem holding the explosive growth in smartphone penetration in India. Although the mobile internet speed has risen tremendously since the advent of 4G LTE, India still stands at 113th position among 126 countries. The mobile broadband download speed in India has clocked 8.99 Mbps as of April 2018.