Samsung is set to manufacture some of the A12-branded chips that will power the 2018 iPhones and iPads. 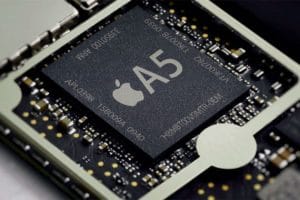 The company previously held a chip-making contract with Apple but lost it to Taiwan-based Taiwan Semiconductor Manufacturing Company (TSMC).

Samsung, along with TSMC, will make 7nm chips for Apple’s 2018 iPhone model – which is lauded as being faster and more energy efficient than the 10nm chips that power this year’s flagship Apple handsets.

A Samsung executive, who oversees chips and other parts businesses, played an important role in convincing Apple to ink the new deal.

The South Korean electronics giant is also currently the only OLED display supplier for the iPhone, with the upcoming iPhone expected to be the first in Apple’s history to feature OLED screen technology.

The Investor reported that Samsung recently purchased extreme violet lithography machines, referred to as “the most advanced chip manufacturing equipment.”