Mercom Capital Group recently released its funding and M&A report covering the global battery storage, smart grid and efficiency sectors for Q2 and the first half of 2017. The companies featured in this report raised US$ 1 billion in venture capital funding (including private equity and corporate venture capital) in 1H 2017. Indian firms also raised considerable global investments.

Mercom Capital Group recently released its report on funding as well as the mergers and acquisitions (M&A) activity for the global and Indian battery storage, smart grid and energy efficiency sectors for the second quarter and first half of 2017. Here are the key excerpts…

Global investments in battery storage are on the rise
Globally, venture capital (VC) funding (including private equity and corporate venture capital) for battery storage companies jumped in Q2 2017 to US$ 422 million covering 10 deals compared to US$ 58 million for eight deals in Q1 2017 due to a very large funding deal. Year-over-year (YoY) funding was also higher compared to the US$ 125 million raised in Q2 2016 from 10 deals. In the first half (1H) of 2017, US$ 480 million was raised in 18 deals compared to the US$ 179 raised in 20 deals in 1H of 2016.
The top VC funded battery storage companies in Q2 2017, globally, were Microvast Power, which raised US$ 400 million from CITIC Securities, CDH Investment, National Venture Capital, and others; Vionx Energy, which received US$ 12.75; and Moixa Technology, which raised US$ 3.2 million in funding from the Greater Manchester Combined Authority, Tokyo Electric Power Company (TEPCO) and First Imagine! Ventures.
Eleven investors participated in battery storage funding in Q2 2017, with lithium-based battery companies raising the most.

Some of the Indian battery storage companies that have received funding include: 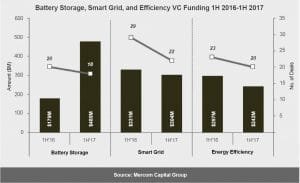 Advice to new players in the Indian market
Raj Prabhu, CEO & co-founder, Mercom Capital Group
“New players have to first figure out a cohesive strategy and focus on what specific product they are going to sell. Too many companies want to sell everything. Also, if you want to be a battery supplier, you need to invest in developing technology. Most companies in India wait for technology to be developed abroad, which they can implement in a cost-effective way without doing any R&D. Most of the time this does not work. If your product differentiation is just related to cost, then chances are you will never be able to compete with the Chinese. You have to think long-term, specialise in a core area and raise a lot of capital to succeed in this market.”

Global funding for smart grids witnesses a slowdown
Global VC funding for smart grid companies saw a fall in Q2 2017. It totalled US$ 139 million in eight deals compared to US$ 164 million in 14 deals in Q1 2017. There was a YoY fall too, as US$ 222 million had been raised from 15 deals in Q2 2016. In the half-yearly comparison, US$ 304 million was raised in 22 deals in 1H 2017 compared to US$ 331 million raised in 29 deals in 1H 2016. So there was a slight fall here too.
The top VC funded smart grid companies in 2017 include Actility, which secured US$ 75 million from Creadev, Bosch, Inmarsat, Idinvest, Bpifrance, Ginko Ventures, KPN, Orange Digital Ventures, Swisscom and Foxconn. ChargePoint raised US$ 43 million from Siemens, FreeWire Technologies received US$ 7.6 million; and Enervalis secured US$ 4.8 million from LRM, Nuhma and ABB.
Seventeen investors participated in smart grid VC funding rounds in Q2 2017. There was one debt and public market financing deal in the smart grid domain in Q2 2017, totalling US$ 9 million compared to no deals in Q1 2017. In 1H 2017, only US$ 9 million were raised in one deal compared to the US$ 217 million raised in three deals in 1H 2016.
There were six smart grid M&A transactions in Q2 2017 compared to seven transactions in Q1 2017. So, in the first half of 2017, there were 13 transactions (three disclosed) compared to five transactions (two disclosed) in 1H 2016. 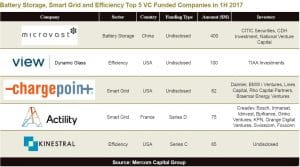