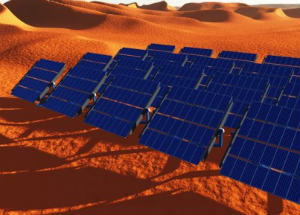 March 13, 2015: The Ministry of New and Renewable Energy (MNRE) had assigned a study to the Power Grid Corporation of India Ltd (PGCIL) to identify likely renewable power potential in desert regions in the states of Rajasthan (Thar), Gujarat (Rann of Kutch), Himachal Pradesh (Lahul&Spiti) and Jammu & Kashmir ( Ladakh). Piyush Goyal, Minister of state for Power, Coal and New and Renewable Energy gave this information in the parliament.

The minister further stated that in December 2013, the PGCIL had submitted a study report titled “Desert Power India- 2050” assessing renewable power potential, transmission infrastructure requirement, balancing reserve etc in the identified desert regions. The report has assessed the total available potential of 315.7GW of solar and wind power in these regions. The report has further estimated that the investment requirement for harnessing the available potential up to 2050 would be Rs 43.74 trillion.