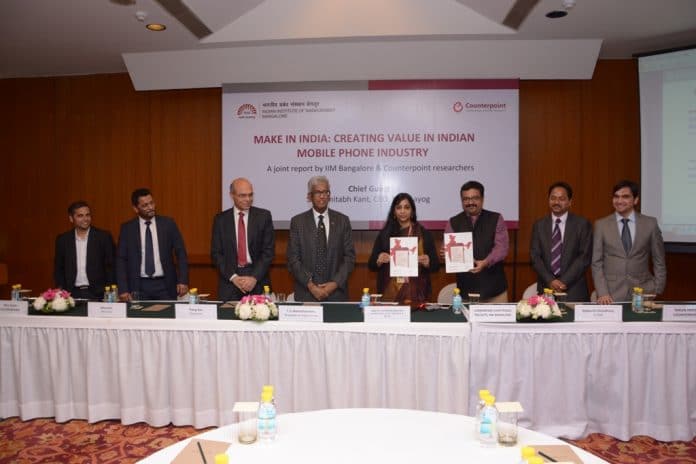 A joint study from IIM Bangalore and Counterpoint Researchers, released here today, analyzes the current state of mobile phone manufacturing in India and provides detailed recommendations on the future steps for a phased manufacturing approach.

The report makes a first attempt in documenting this path forward with the hope that ‘Make in India’, in conjunction with Innovate, Design and Skill India will kick-start the economy into a zone of technological leadership rather than continuing to play the laggard in a digital global economy.

Releasing the report, Aruna Sundararajan, Secretary, Ministry of Electronics & IT, Government of India, commended IIM Bangalore and Counterpoint Researchers for working on what she described “a very important and timely” study. Pointing out that there was plenty of work ahead on fronts such as tariff regime, skill development, design knowledge and creation of strong infrastructure to aid the formation of electronics manufacturing clusters, she said the government would have to work with local industry and several partners to achieve this.

Based on the proposed plan and recommendations in the study, IIM Bangalore’s Professor Chirantan Chatterjee, from the Corporate Strategy and Policy Area, who is the lead author of the study, says that the Government’s role in driving the right policy reforms, such as effective duties on key components along with attractive incentive structures, can drive key suppliers to India.

Commenting on current state of manufacturing, Counterpoint Research’s Senior Analyst and co-author of the study Tarun Pathak, said that the ‘Make in India’ initiative has been successful at driving some indigenization of assembly of mobile phones; the number of mobile phone and related components manufacturing facilities are estimated to exceed 50 units by the end of CY2016, up from just two units before the ‘Make in India’ program was announced.

Counterpoint Research’s Research Director and co-author of the study Neil Shah, citing the practical approach as highlighted in this study, said that it is critical for the ‘Make in India’ to transform the current manual semi-knocked-down (SKD) level assembly and minimal amount of local component sourcing into a large-scale manufacturing ecosystem over the next few years.