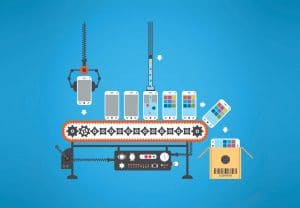 Handset manufacturers have made a proposal for a 10-year tax holiday on the exports of mobile phones to boost domestic manufacturing in India. Pankaj Mohindroo, chairman of industry body India Cellular and Electronics Association (ICEA), have informed that the proposal has been shared with the Prime Minister’s Office, the Department of Industrial Policy and Promotion and the information and technology ministry.

The chairman added that the proposal would benefit the manufacturing industry and the people associated with it. In a media interaction with ET, he said that the exchequer would gain through income tax and GST generated by millions of jobs and revenue worth $400 billion within the country.

Experts have highlighted that India has not been able to attract a lot of component manufacturers of printed circuit boards and LCD screens with its low-scale offerings in the segment. They have suggested that a focus on building the export market for the component ecosystem would help in its progress by drawing the desired lot of makers.

Experts have opined that the government’s Phased manufacturing programme (PMP) should be supported with a market for the key products. The first phase of PMP has set up around 120 plants and the manufacturing segment can generate $500 billion in the next five to seven years. Around $230 billion has been projected to come from handsets and $270 billion from components.

India imports most of its electronic products from technology giants based abroad. The government has been promoting local manufacturing to bring down the imports bill through its various programmes. Handset and component producers have also shown interest in investing in establishing plants locally in the country. Recently, Korean electronics major Samsung has built its manufacturing centre in India to expand its export business.

India has aimed to make 1.25 billion phones and export 800 million in the next five to seven years. Navkender Singh, associate research director at market tracker Interactive Data Corporation (IDC), said that India must commit to long terms plans spanning10-15 years to develop an ecosystem. He added that making India an export hub would support the move.