Hilly roads are always a tricky place to drive, with the number of hairpin bends and blind turns making them prone to accidents. It is with this that Leo Burnett India has unveiled a new road safety technology in association with HP Lubricants. 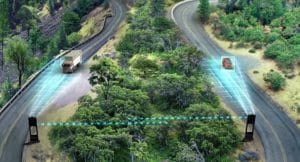 The accident detection setup uses smart, connected poles on either ends of blind curves and hairpin bends that are powered by solar energy and are connected to each other wirelessly. Further, these poles will house a barrage of radar and proximity sensors to detect speed and communicate with each other to detect the distance that two cars are at from the turn, to alert them of the presence of an obstacle.

Dubbed ‘SmartLife’, the SmartLife poles use electromagnetic transmitters to transmit signals at 24GHz. Following this, receiver units of SmartLife measure the frequency shift of the reflected signal, in accordance with Doppler Effect (which measures the increase/decrease in frequency that occurs when the distance between source and obstacle is altered). This also allows the radar unit to detect the speed based on the increasing shift in frequency as cars come near the poles.

The two SmartLife poles on either end of the turn are powered by solar energy, and are connected to each other by wireless data transmitters. Once the distance and speed of an approaching vehicle is detected, the two poles communicate with each other to relay the relative distance and approaching speed of two cars on either end of blind turns. This triggers the anti-collision warning system, which then blares a warning to alert both the vehicles and slow them down.

The new technology is important for hill road safety, which always includes sharp turns, blind curves and hairpin bends that gives drivers minimal visibility of what is on the other side. The Leo Burnett SmartLife collision detection system has presently been deployed on the NH1 stretch along the Jammu-Srinagar highway, that has been one of the most accident-prone areas to drive in.

Alongside family and individual commuters, this would also help commercial and heavy commuters who have lesser time to maneuver vehicles and slow down than smaller personal vehicles. The long range distance and speed detector will detect the distance and provide ample buffer to slow the cars down, which can potentially prevent multiple accidents that occur on this route.