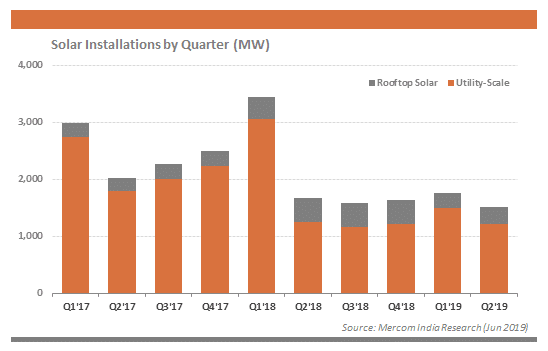 According to the report, India’s cumulative installed capacity stood at 31.5 GW by the end of Q2 2019. However, rooftop installations still only make up 12 per cent of total solar installations and the country has achieved only 10 per cent of its target capacity addition of 40 GW by 2022. 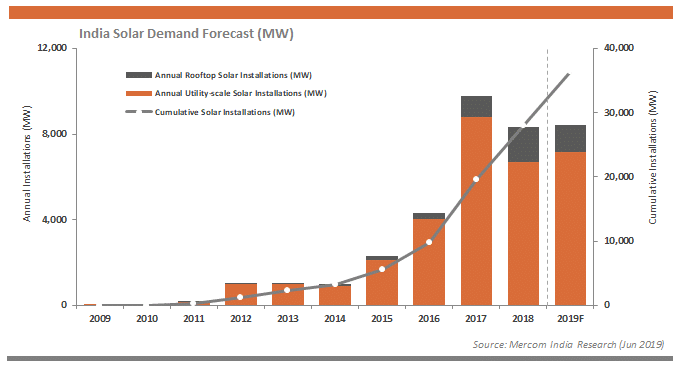 Mercom India Research forecasts India to install over 8 GW of solar capacity in the calendar year 2019. The report estimates solar installations in India to reach approximately 70 GW by the end of 2022 based on the current market dynamics.

Tariff caps imposed by government agencies have slowed down the solar auction activity in the country. Developers are reluctant to bid at the levels prescribed by state agencies, instead of a market-based auction in which the lowest bid wins.

Land acquisition, transmission, and acquiring approvals remain a challenge to commission large-scale projects on time. Developers have also raised concerns about charges for forecasting and scheduling power during drastic changes in weather conditions.

But one of the biggest concerns, which looks like is close to being addressed through the courts, is the attempted renegotiation of PPAs. “The Andhra Pradesh government’s move to renegotiate and revisit solar and wind PPAs has rattled the industry and dampened investor sentiment. The industry is waiting for a ruling from the courts that sets a precedent for future cases and makes it difficult for government agencies to cancel or renegotiate signed contracts,” added Prabhu.

Rajasthan was the top installer with newly added large-scale solar capacity in Q2 2019 followed by Madhya Pradesh, Andhra Pradesh, Tamil Nadu, and Gujarat. Large-scale solar installations were concentrated in five states, which made up 94 per cent of the installed capacity in the quarter.

Though the current state of the market looks weak, India will continue to be one of the top three solar markets in the world. With the new government in place, the support for renewable energy is stronger than ever among policymakers.