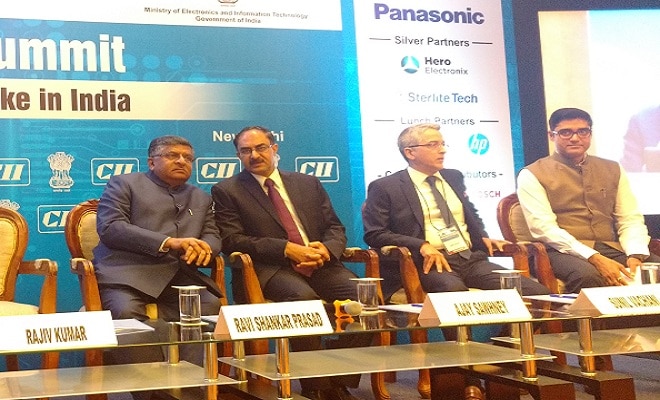 Electronics manufacturing is not something that is done in isolation. All this is a part of larger narrative. Under the leadership of Prime Minister Narendra Modi, the government is taking efforts to make India a transformative society by application of technology, i.e. Digital India – Prasad said while speaking at an event organized by industry body CII.

Electronic products are the enabler of Digital India, he added.

There is a huge consumer base which is waiting to lap up new electronics products from TV and refrigerators to washing machine, mobile phones and LED lights to unconventional energy products, the Minister said.

“We have to tap the huge talent potential in India and also to skill them. Just like digital India, the same mass approach has to be applied for electronics in terms of human resource creation,” he said.

This is one area where industry and government have to work together, he added.

Citing challenges in the industry, the Minister pointed out the need for research and development (R&D) in the field of electronics, while adding that government and Industry has to work in unison to promote R&D in the field.

He pointed out that currently there are 240 companies in India which are making electronics products and 127 companies manufacturing mobile phones.

“And this whole ecosystem is providing employment to 5 lakh people,” he added.

Prasad further informed that the government has almost finalised the National Policy on Electronics (NPE) 2018 to boost electronics manufacturing in the country on a large scale.

“We are working on electronics policy, we have almost finalised that. We had widest consultation possible,” he said.

“We are pushing India’s case for US$ 1 trillion digital economy and that report is almost finalised and the Prime Minister is soon going to launch it,” he added.

The first NPE was announced in 2012 that provided incentives to companies setting up manufacturing plants in the country.