One of India’s largest independent renewable energy power producers, ReNew Power, on Saturday announced the commissioning of its 143 MW solar farm in Dharmaraopet village in Sadashiva Nagar mandal, Kamareddy district, of Telangana. The company has invested about Rs 9.3 billion in the project, at a rate of Rs 0.065 billion per MW. 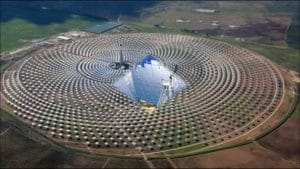 Speaking about the farm, Sumant Sinha, Chairman and CEO of ReNew Power, informed that it gives them great pride to partner with the Government of Telangana and play a leading role in its mission of harnessing the solar potential of the State.

He further expressed that the enabling environment of the State and the support that the administration provides makes Telangana an attractive State for the solar power industry. He was affirmitive of reaching an installed capacity of 510 MW in Telangana in the next few months and it will help ReNew Power cross the total investment of Rs 37 billion.

Parag Sharma, Chief Operating Officer of ReNew Power, said that the Dichpally solar farm is the largest solar plant in Telangana and the first one to use tracker technology on such a large scale, which increases power generation by 15 per cent to 20 per cent. It was commissioned in a record time of 15 months, which is three months ahead of schedule.