Are US low interest loans for solar projects in India a boon or a bane for the industry? 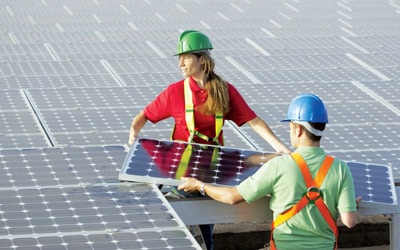 While the solar project developers are happy, indigenous manufacturers of solar panels and other equipment may suffer in the long run

The recent low interest loans sanctioned by the US Exim Bank for two solar projects in India have raised some concerns in the domestic solar industry. These are seen as a US move to lure Indian solar project developers with low interest rates, while mandating that they have to buy solar panels, cells and equipment from US companies.

The US Exim Bank has sanctioned a whopping US$ 57.3 million for two solar projects in India. These loans have been given to Solar Field Energy Two Pvt Ltd and Mahindra Surya Prakash Pvt Ltd to import solar panels and ancillary services to India from the US.

Solar panels manufactured by the US company First Solar will be used in setting up the solar photovoltaic plants in Rajasthan, supporting 200 jobs at First Solar’s manufacturing facility in the US.

India is one of Exim Bank’s nine key markets and accounts for around US $7 billion of its worldwide credit exposure as of FY 2011. In FY 2012, to date, the bank has authorised more than US$ 330 million to solar projects in India.

Are these loans really ‘green’?

These low interest loans are offered under the US ‘Fast Start Financing’ scheme, also called a ‘green bank’. This is a US$ 30 billion fund set up under the United Nations Framework Convention on Climate Change. This fund was adopted at the Copenhagen climate meeting in 2009, to aid developing countries to deal with the impacts of climate change. But according to a section of the Indian solar industry, the US is taking advantage of this fund to ensure that US manufacturers get to sell panels, cells and equipment to India.

While the US Exim Bank offers rates of interest as low as 2-3 per cent, along with a long repayment schedule of 18 years, to Indian solar project developers, loans given by the Indian banks come with a high interest rate of 14 per cent or more. Against the low interest loan, the Indian developers will have to buy thin film panels from US companies, despite the fact that thin film panels have lower efficiency when compared to crystalline panels.

According to former CEO of Tata BP Solar, K Subramanya, most of the solar companies in India, whether big or small, manufacturer or a project developer, import solar panels, cells and equipment, irrespective of whether the US offers low interest loans or not. This is because the cost of production as well as the cost of funding is very high in India, leading to most components being imported. Consequently, Indian manufacturers do not have a level playing field, when competing against manufacturers in China.

One section of the solar industry, however, feels that though this US move may hurt Indian manufacturers, it will definitely help the project developers—akin to when the right hand is happy, and the left is not. Those subscribing to this school of thought believe that keeping in mind the larger interests of the industry, this move may give solar project developers a level playing field to compete with the Chinese. For Indian manufacturers, the solution lies in very attractive government incentives that prop up local manufacture, and attract them to manufacture in large volumes.