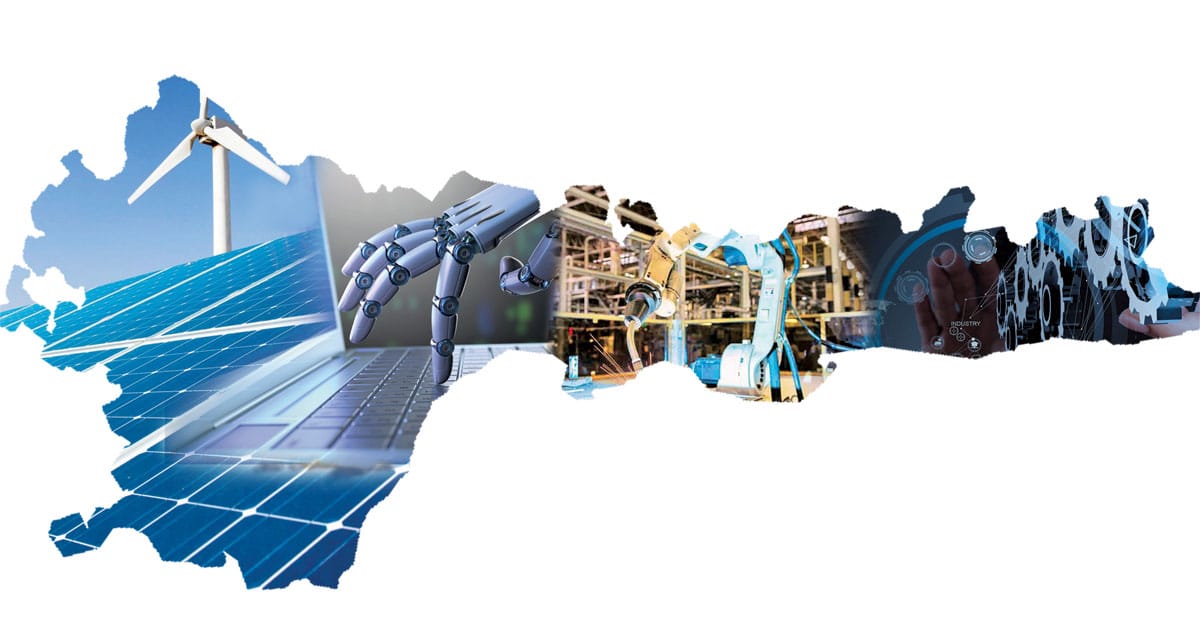 Strategically located on the southeast coast of India, Andhra Pradesh has the second largest coastline in the country, which provides an excellent gateway to the world. The location benefit, coupled with government support, has established the state as one of the best connection points with major world markets.

In the last four years, after the bifurcation of Andhra Pradesh (AP), the state has shown tremendous growth in some prime sectors such as electronics, automobiles and renewable energy. The state government’s Industrial Development Policy 2015-20 aims to substantially increase the share of the industrial sector in the Gross State Domestic Product (GSDP). This will establish AP as a leading destination for both domestic and global investments. In the FY 2017-18, Andhra Pradesh registered a GSDP of US$ 123 billion with an 11.22 per cent growth rate, which is higher than the overall national average.

The state has an efficient transport network that forms the backbone of its trade operations. With six operational ports, four airports, more than 2,000km of rail connectivity and round-the-clock power supply, the state’s logistics network is among the best on the eastern coast of India.

Andhra Pradesh has also set a remarkable standard in attracting foreign investments to help build Amaravati, its brand new capital, on the banks of the river Krishna. In a first, Japan and Singapore, the technologically advanced nations of the Asia Pacific region, have extended financial assistance and technical expertise to build world class infrastructure in Amravati. Andhra Pradesh has also initiated some progressive policies in the electronics and solar power sectors. Let’s have a look at some of the state’s major moves.

Being the first state to come up with the Electronics Manufacturing Cluster (EMC) policy in the country, Andhra Pradesh has taken some remarkable steps in shaping its electronics sector. Says Bhaskar Reddy, CEO, APEITA, “Under the new EMC policy, the state intends to develop 4500 acres of land exclusively for electronics manufacturing. As per the terms of this policy, a developing company or a consortium of electronics companies can apply for land for a cluster. The government will extend incentives for the basic enabling infrastructure in these clusters.”

Highlighting the developments that have taken place after the state’s EMC policy was formulated, Reddy says that AP has already attracted three consortiums to develop three clusters, one of which is a medical cluster. The state is also working on a PCB park to promote the manufacture of PCBs in India. Visakhapatnam is the destination for the first PCB cluster in the country.

With AP’s enabling policies, many EMCs are being set up in the regions of Tirupathi, Sri City and Gudipalli. Talking about the two major EMCs of the state, J. Krishna Kishore, CEO,

APEDB, says, “Under the proposed Information Technology Investment Region, (ITIR) Cluster 1 occupies a total area of 59.5sq km (with a processing area of 35.4sq km and a non-processing area of 24.1sq km). Cluster 2 is close to Sri City and is predominantly a greenfield area. This will be strategically developed to house firms from the IT, ITeS and EHM (electronics hardware manufacturing) sectors. The proposed Cluster 2 is also well connected with NH-716 and NH-565.” He adds that apart from the electronics cluster, Sri City has emerged as a Special Economic Zone with a well planned infrastructure where almost 150 companies from 27 countries will begin operations. The city has a strategic proximity to Chennai and also has excellent connectivity with all major cities in India.

Industry-friendly initiatives taken by the AP state government
Phased Manufacturing Programme (PMP) in collaboration with the Indian Cellular Association: Aligning with the central government’s Phased Manufacturing Programme, the APEDB has signed a memorandum of understanding (MoU) with the Indian Cellular Association (ICA) to establish a robust cellular mobile handset manufacturing ecosystem in the state. “Apart from preparing a roadmap, the ICA will assist the government of Andhra Pradesh to reach out to marquee players in electronics and hardware manufacturing not only in India, but also from China, Japan and Korea,” Kishore says. He adds that the PMP will enable companies from the mobile handset and related sub-assembly or component industries to invest in Andhra Pradesh.

‘Electronics desks’ for Japan, China and Korea: To woo investments from technologically advanced countries, the APEDB has created country-specific desks for Japan, China and Korea, with a focus on electronics and hardware manufacturing. These desks, which are also part of the state’s External Engagement division, are one-stop nodal points for exploring and materialising entry plans to India. They promote, facilitate and retain investments from these countries and are integral to Andhra Pradesh’s recent No. 1 ranking in ease of doing business.

Empowered Mission for Electronics and IT Promotion: Speaking of other developments, Kishore adds, “We have started an autonomous society, with its headquarters at Visakhapatnam, called the Empowered Mission for Electronics and IT Promotion, to give a fillip to the development of the sector, and take faster and agile decisions.” The mission will be headed by a technocrat, and will comprise experts from the fields of electronics and IT, the academia as well as from marketing and promotion.

An effective single window system: According to the India Brand Equity Foundation (IBEF), Andhra Pradesh is the first state in the country to have enacted the industrial single window clearance system. It has set up a high-level, empowered ‘Single Window Clearance Unit’, which grants approvals and clearances for the setting up of new units and for the expansion of existing ones. It is supported by a state-of-art centralised helpdesk on a 24×7 basis, duly leveraging the e-Biz portal set up by the government of India. The main objectives of this window are to reduce both the time and the money required to set up businesses in the state.

Time bound approvals: According to Kishore, the following steps have been taken to provide approvals to companies or investors within four weeks:

“There is a provision in the relevant legislations or rules that in case the required approvals are not granted within four weeks of the state receiving an appropriately filled application, the approvals shall be deemed to have been granted,” Kishore adds.

Mission to identify and work on thrust areas: Keeping in mind the requirements of the industry, the Empowered Mission for Electronics and IT Promotion has identified some key thrust areas in the electronics industry of the state. There is a special focus on developing an ecosystem in these areas—fabless semiconductors, mobiles, consumer electronics and appliances, cells and components, electronics manufacturing services (including PCBs), lithium batteries, solar PVC panels, LEDs, smart meters, FPO TVs, tablets, base stations, smart cards, IoT, etc.

Andhra Pradesh’s booming renewable energy scenario
Andhra Pradesh enjoys an abundance of solar and wind energy because of its geographical location, which offers enormous potential to promote renewable energy projects in the region. The National Institute of Solar Energy (NISE) has calculated that the solar power potential of AP is close to 38.5GW. The wind power potential is 44.22GW as per the estimates of the National Institute of Wind Energy (NIWE). Keeping these opportunities in mind, the state government formulated the Andhra Pradesh Solar Power Policy in 2015. Under the terms of this policy, all solar power projects in the region have been given a ‘must run’ status, which means any power generated by the power plants will be supplied to the grid in all conditions. The main vision of the state government is to make Andhra Pradesh a power surplus state; therefore, the policy gives utmost preference to the single window mechanism for faster deployment of power plants and exempts cross subsidy surcharge within the state for five years.

According to the figures shared by the New and Renewable Energy Development Corporation of Andhra Pradesh (NREDCAP) with Electronics Bazaar, the total renewable energy power installed in the state on June 2018 was 7.05GW, of which 2.46GW is solar power and 3.99GW is wind power. Till May 2018, 1.55GW of solar power had been commissioned in solar parks, while 51.5MW of power had been commissioned on solar rooftop systems.

NREDCAP, which is a state government owned nodal agency for promoting various renewable energy programmes in Andhra Pradesh, is also acting as a single window agency to facilitate quick clearances of the tenders, thereby ensuring timely completion of projects. The corporation, on its own, has set up a capacity of 16.8MW from wind power and 1MW from canal-top solar power, which is the second of its kind in the country, after the canal-top project set up in Gujarat.

More recently, Tata Power Renewable Energy Ltd (TPREL) has commissioned 100MW (50MW x 2) of solar power projects in the Ananthapuramu Solar Park at Andhra Pradesh. According to a company release, the sale of power from this solar plant has been tied up under a 25-year power purchase agreement with the Solar Energy Corporation of India (SECI). Amongst the upcoming solar projects, the development of 500MW of utility scale solar projects by Avaada Power is the most crucial one. As per media reports, to put up this plant the company is planning an investment of ₹ 35 billion in the state. It is estimated that this will generate enough clean energy to sustainably power over 2.4 million households across Andhra Pradesh.