Former Kerala IAS officer Alphons Kannanthanam, has been appointed as minister of state in the ministry of electronics and IT. 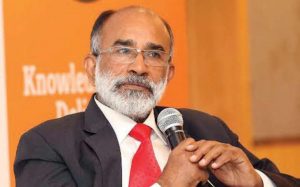 The 65 year old Kannanthanam is a former DDA commissioner and popularly known as Delhi’s Demolition man for his activist stance that led to removal of around 15,000 illegal buildings in the national capital.

In a major cabinet reshuffle today, the Narendra Modi government elevated four junior ministers to the Cabinet rank and inducted nine new faces. The new inductions include four former civil servants with the 1979 batch, Kerala cadre officer being one of them.

Dharmendra Pradhan, who belongs to the state of Odisha that is going to polls in 2018, has been given additional charge of Minister of Skill Development and Entrepreneurship apart from Petroleum and Natural Gas Ministry where he was there for quite some time. Ex-power minister been given the Railway Ministry Ex-power minister been given the Railway Ministry from Suresh Prabhu. Goyal will have additional charge of Ministry of Coal.

Suresh Prabhu, who resigned as Railway Minister following a series of train accidents, has been moved to Minister of Commerce and Industry.