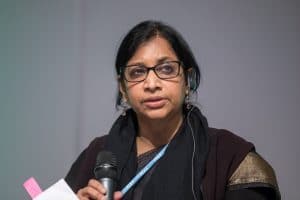 The Department of Telecommunications (DoT) has asked the finance ministry to offer some GST-related relief to telcos and to bring down import duties of network equipment, but the ministry is not considering any other company specific relief measures as sought by Vodafone Idea.

At a recent industry event telecom secretary Aruna Sundararajan said the industry needs to speak in a cohesive voice while seeking further financial relief. Sundararajan further informed that COAI was asking on behalf of some operators and this is not industry-wide issue. She stated that DoT has given them some relief and told them unless they are able to convince the government that it is industry-wide issue, DoT will not be able to make a concession for one operator.

The industry had also called for a rollback of the basic customs duty increase on several telecom equipment in October 2018 and the duties imposed on printed circuit boards used in them in a bid to curb non-essential imports and address its current account deficit as well as encourage the ‘Make in India’ initiative.

Sundararajan further commented that certain things has to be left to the market, for the government cannot step in to overcome those challenges.