Since March, ReNew Power has announced the commissioning of over 500 MW of combined wind and solar energy projects, 300 MW in Gujarat, 110 MW in Rajasthan, and now 105 MW in Gujarat 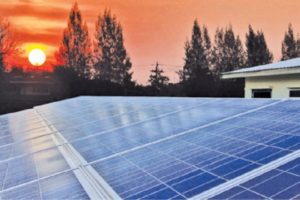 ReNew Power announced that it has commissioned a 105 megawatt (MW) solar generation facility in Gujarat. The project has a 25-year power purchase agreement with the Gujarat Urja Vikas Nigam Limited (GUVNL) to provide clean electricity to the state at a tariff of Rs 2.68/kWh (US$0.036/kWh).

Since March, ReNew Power has announced the commissioning of over 500 MW of combined wind and solar energy projects, 300 MW in Gujarat, 110 MW in Rajasthan, and now 105 MW in Gujarat.

The company said in a statement that it will deploy advanced mono perc solar modules with seasonal tilt structure design as part of the project to ensure greater generation efficiency and maximum utilization of assets at the solar farm.

Founder, Chairman and CEO Sumant Sinha said, “The 105 MW Gujarat project commissioning is a significant step forward for ReNew Power. The project has been commissioned amidst a COVID-19 surge and reflects the commitment of our team to contribute towards India’s ambition of achieving 450 GW of clean energy by 2030.”

ReNew Power had previously announced that it has entered into a definitive agreement for a business combination with RMG Acquisition Corporation II (NASDAQ: RMGB), a publicly-traded special purpose acquisition company (SPAC), that would result in ReNew becoming a publicly listed company.

Completion of the proposed transaction is subject to customary closing conditions and is expected to occur in the second quarter of 2021.