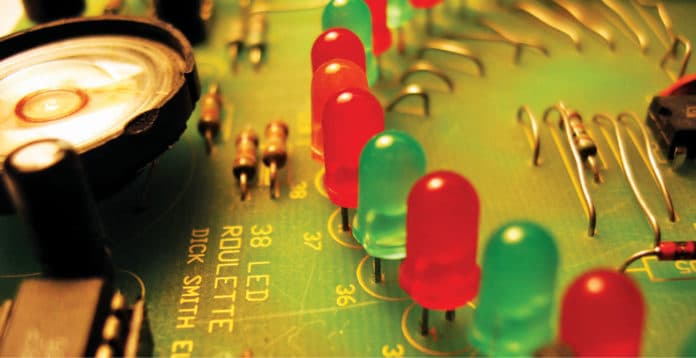 The light-emitting diode (LED) market has been booming with the growing demand for LED displays and lights. LEDs have now been adopted in the automotive, aerospace, building, traffic light and advertisement sectors. This market will grow endlessly until we replace every conventional light with an LED. In such a scenario, it’s crucial that buyers have accurate measurements of the various optical parameters of LEDs.

LEDs have to be tested during production and in their final application for uniform output throughout their life. Comprehensive optical characterisation is also essential during the research and development of LEDs and related products. This helps to ensure compliance with safety and performance standards. The simplest device to test an LED is the multimeter. If a multimeter shows an approximate voltage of 1600mV in its diode setting on connecting leads with the cathode and anode of the LED, then it indicates that the LED is of good quality.

Parameters to measure while testing LEDs
There are a few basic parameters to be measured during LED testing like the luminous flux, luminous intensity, spectrum, colour, and the spatial radiation pattern of LEDs. Measuring different parameters helps to gauge and define different characteristics, as shown below.

To test the longevity of LED hardware, certain tests need to be performed. These include fatigue testing, assembly checks, dielectric voltage-withstand tests, function tests, endurance tests, and electromagnetic compatibility (EMC) tests. Fatigue tests help to assess the durability of functional parts for prolonged use. The assembly check can help to verify whether customers can easily assemble, install and use the product. The dielectric voltage-withstand test measures the current leakage and detects electrical or dielectric breakdown. A function test helps to verify whether the LED lighting product functions properly, according to the user manual. An endurance test, or running test, assesses the safety and functional performance of lighting products over time. EMC testing helps ensure LED lights do not emit excessive electromagnetic interference (EMI) during use. High EMI can disrupt or damage other electronics within the same environment. 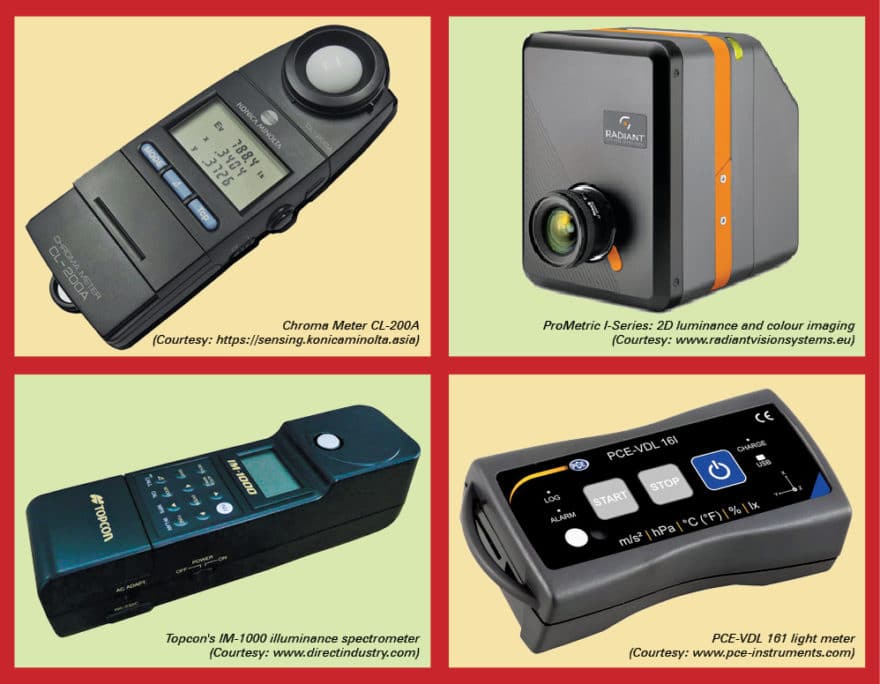 How to test LED lighting products
The luminous flux emitted by a source in a certain direction is measured in lumens per solid angle. To comply with photometric principles, the measurement distance between source and detector must be at least 10 times the maximum dimension of the source. In practice, taking this measurement accurately is complicated due to the need for precise distancing and axial alignment of the detector in front of the LED test sample. Be aware that the manufacturer’s luminous intensity specifications can only be reproduced if the measurement geometries are identical or if the LED exhibits a uniform spatial flux distribution. If the flux pattern is not uniform, the total flux cannot be calculated using the luminous intensity data. Different solid angles may also lead to differences in the colour data due to LED colour variations in certain directions.

Most LED manufacturer data sheets include information on colour coordinates, colour temperature, CRI, colour purity or colour deviation. Colour is most accurately measured with a spectral measurement instrument. This spectral data is further used to calculate various colour properties. Once assembled into the fixture the individual LED colour specs could change, causing a noticeable variation in colour within the luminaire. These slight variations in colour temperature will create an uneven lighting effect.

Measuring the luminous intensity of LEDs at short distances is problematic because many LEDs have epoxy lenses, and since they do not behave as a single point source, the inverse-square law does not apply too well. For increased flexibility, modular light meters that enable accessories to be attached and interchanged, such as different sized integrating spheres and illuminance diffusers, help to reduce instrumentation costs.

Light meters contain a sensor that converts the light energy into an electrical charge, and the latter provides that reading. They are typically small enough to be handheld and easy to use. Some light meters are also equipped with internal memory to save measurements.

A few instruments to measure the lighting characteristics of LEDs
PCE-VDL 16I: This is a light meter manufactured by PCE Instruments. It measures and stores the relative humidity, temperature, air pressure, light as well as acceleration in three axes. It is used to monitor vibrations on machines, simultaneously measuring and recording the relevant environmental conditions of the system. It has a 32GB SD memory card with evaluation software.

Topcon’s illuminance spectrometer: This instrument measures CRI, colour temperature, and the illuminance of a light source. The IM-1000 from Topcon is capable of a wide range of illuminance measurements. It is used for checking illuminance in the construction industry, and inspecting LED illumination products in R&D and manufacturing units. It uses the linear variable filter spectral method and a silicone photodiode array to measure the wavelength range of 380nm-780nm with an output wavelength resolution of 1nm.

The instruments in this series are built around scientific-grade CCD sensors, which enable pixel-level measurements of displays, and accurate measurements of LED luminance and colour in luminaires. These sensors have a resolution range from 2 to 29 megapixels. The I-series can analyse pixel defects on a >4K display, or test the colour and brightness of many illuminated symbols of an automotive instrument cluster at the same time.

Chroma Meter CL-200A: This measures the chromaticity of light sources such as LEDs, organic LEDs, as well as parameters such as colour temperature and illuminance. It is capable of inspecting the output light quality while measuring the chromaticity from the phosphor of a completely assembled white LED.

The meter comes equipped with a low-battery indicator and has a rechargeable battery. The CL-S10w data management software makes it easy for users to transfer data to Microsoft Excel. It can also be connected and operated directly through a personal computer. It can collect multi-point measurements by using up to 30 receptor heads along with the user friendly calibration function.

The performance and appearance of products such as flat-panel displays, car interiors and LED lighting are continuously evolving. Designers and manufacturers are being pushed to improve the user experience. Test and measurement instruments used in the development and production of LEDs must keep up with the latest technologies.

BEL has 1,280 SMEs on its vendor directory