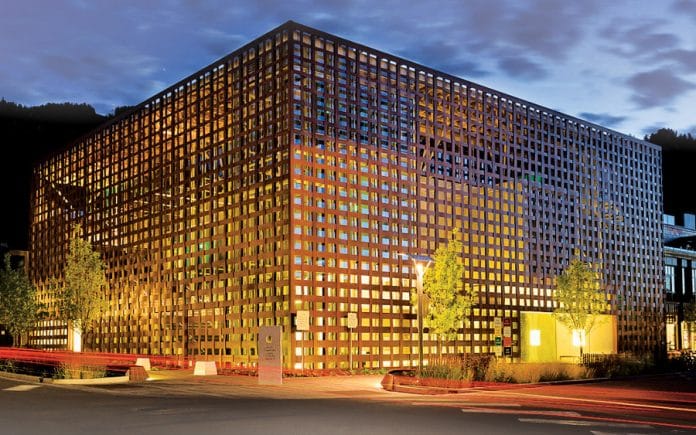 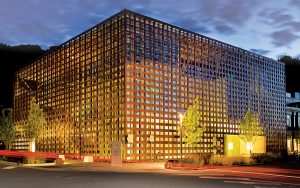 The effective illumination of facades can turn a building into a real eye-catcher when viewed from afar. Lighting accentuates the architecture and highlights a company’s logo or name. The high-contrast interplay between light and shadow increases the overall vividness. And dynamic light effects leave a lasting impression on viewers.

Façade lighting underlines the architecture and emphasises the key features of a building’s elevation. Without the interplay of light and shadow, the front of a building would look flat if lit only by a single layer of bright light.
Beautifully-lit buildings look good and enhance the surroundings. Large companies upgrade their buildings with such lighting, which attracts employees and customers. The appealing townscape, in turn, attracts tourists and investors like a magnet. However, the lighting solutions used need to be sustainable, conserving resources and preventing unnecessary light pollution.
Well executed façade lighting can actually change the way we look at buildings. A smart, yet resource-saving combination of façade lighting meets functional and artistic requirements, creates new urban spaces and contributes a unique quality to how a town or city’s architecture is enjoyed at night. One of the most challenging tasks in illumination engineering is designing good façade lighting schemes for old heritage monuments.

Tips for buyers
The way the façade of a building looks is important for both the designers as well as the developers, as it creates the first impression of the building. The correct lighting techniques will highlight the main features of a building, so it is important that the right elements are picked for the task.
Highlighting an object makes it visible, whereas a completely different result is achieved by silhouetting, which involves placing lights behind objects and illuminating the backdrop. “Shadowing plays an important role when an object has some pattern on it, as this creates an interesting effect with lighting,” says Samridh Kedia, director, Glowz LED Lighting. In order to add a simple contrast, uplighting is done on pillars/columns. Accentuating is done when an object needs to be the centre of attraction.

The different façades that can be lit up
A façade’s form appears different, based on the light that falls on it, its direction and colour. The appearance of a façade alters during the course of the day due to the changing direction of light, and the varying components of diffused and direct light. 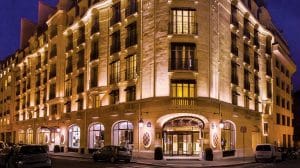 Current market trends
As technology advances, facade lighting is gradually following the trend of miniaturisation. Other new trends include the media façade, which refers to a mode of lighting with the help of which light sources are integrated into the front face of a building. This lighting method borrows from the digital media format of displaying graphics, text and even video images on a building at night, visually transforming its facade after dark. This method is now being recognised as a new field in visual and spatial art that overcomes the structural limitations of rigid architecture. It uses the colours of light to enhance the best features of the building. In short, the architecture of the façade is effectively used as a canvas to display media and digital art on a large scale.

“Floodlights in facade lighting can be seen as being in sync with nature, with the focus on nature-inspired lighting themes. In India, the problem is that contemporary facade design has completely distanced itself from the past. When design works to create an identity for the designer, it is because the work is not visible but the idea is. We are all very fond of the ‘new’ but there is nothing that grows old faster than what was once considered ‘new’. Facade lighting does not belong to a particular style and hence will remain timeless, never going out of style.”
—Devashish Ganguly, DGM, Havells Lighting

“When it comes to facade lighting, the trend we see in the market is that unique buildings are being highlighted by using various colour-changing schemes, mainly because this looks great when compared to normal lighting. The Indian façade lighting industry is in the growth stage, both in terms of the materials and technology being used. In spite of the challenges, which will take some time to be addressed, there is a growing acceptance of quality products in the Indian market. In the last 1.5 years, we have seen an overall increase of 35-40 per cent in the sale of LED facade lighting. Major products like wall washers, floodlights, etc, are bulky in size but the industry is gradually moving towards miniaturised products, because customers no longer want the bulky lights to be visible since they do not look nice. They prefer great illumination for the buildings using hidden light sources.”
—Samridh Kedia, director, Glowz LED Lighting

“The trend nowadays is to opt for products that are compact and, at the same time, economical. An important current requirement for the façade lighting of heritage monuments is the colour rendering index (CRI). Customers tend to focus more on higher CRI LED products since they render the original colours of the monuments better, apart from providing better visibility at even lower lux levels.”
—Rajeev K. Rohatgi, director, Binay Opto Electronics Pvt Ltd

“As far as facade lighting is concerned, in India, we are a ‘value for money’ economy. Indians do not like to spend too much on aesthetics, although there are certain luxury housing projects and high-end corporate houses, for which the designers are opting for facade lighting. As far as miniaturisation is concerned, we need to understand that, in India, consumer awareness and knowledge about LED usage is comparatively low. People have limited exposure and hence are not aware of the important parameters to keep in mind prior to choosing a good product or of how to differentiate between the good and the bad.”
—Vimal Soni, director, Corvi LED