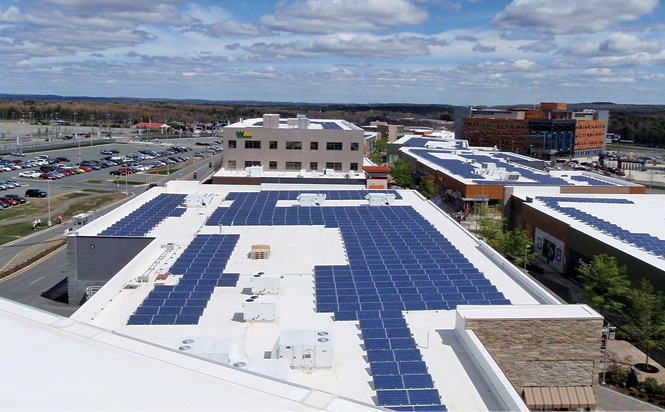 Ever since cryptocurrencies became popular after the hype around Bitcoin, its underlying technology, the blockchain, has found application in numerous other sectors such as healthcare, real estate, tourism and media, for data maintenance and security. The green energy sector, too, can benefit immensely by using this technology.

In the renewable energy sector, established companies as well as startups such as Acciona Energy, Irene Energy, Brooklyn Microgrid, The Sun Exchange, Electrify Asia, Greeneum and Iberdrola, have realised the potential of blockchain. There have been several attempts to use it as a tool for catalysing the transition to green energy. Adrienne Smith, executive director, Brooklyn Microgrid, says, “I think that blockchain technology will allow for energy production and consumption to be decentralised. So, instead of having a major centralised utility that uses fossil fuels to generate electricity, blockchain technology will make it easier to utilise renewable energy to generate electricity. For our company, blockchain technology allows us to accurately track the amount of solar energy both produced and consumed by our participants.”

Data in a blockchain is added in chronological order, in the form of blocks, which ensures immutability. In addition, updates are made to the blockchain only after consensus among all the peers in a network. New additions are linked to the previous ones through cryptography, which ensures security. Data formats can also be standardised across different institutions. All these features promote transparent sharing of information and establish trust among users.
According to a recent report from Research And Markets, the use of blockchain in the energy market resulted in a turnover of US$ 518.6 million in 2018, and this is projected to grow at a CAGR of 54.09 per cent during the forecast period from 2019 to 2024.

In a smart electricity grid, renewable energy acts as backup power when the central grid fails to balance supply and demand. As more people get renewable energy installations in their homes, the number of prosumers (those who produce energy and consume it) in the market increases. And they can sell the excess energy generated. For instance, solar power from rooftop panels attached to a computer can provide energy at a low cost during the day when sunlight is in abundance. This decentralisation of energy systems can create stress on traditional electricity grids, though. The blockchain can help to stabilise the grid through peer-to-peer (P2P) transaction platforms that enable the buying and selling of energy generated from even small-scale installations. Pando by LO3 Energy (headquartered in Portland, Oregon, USA) is one such platform that allows pooling of local distributed energy resources and optimises the grid at a community level.

By linking energy grids to the blockchain and by using smart meters, data sharing is possible in real-time. Electricity generated and consumed is tracked and recorded in a tamper-proof way, ensuring accountability between sellers and buyers. Customer energy usage patterns can be identified, which makes it easier to supply the right amount of energy and reduce the gap between supply and demand, with or without access to central grids. Consumers can make more informed decisions as they can compare supplies from different energy providers, and thus drive competition.

Small producers and new players can also get green certificates for trading automatically through the blockchain, which improves the chances of more investment in this field. This promotes local consumption and mainstreams the use of clean energy, while simultaneously reducing transmission losses and the need for expensive infrastructure.

Australia’s Power Ledger has been working in the P2P energy trading space since 2016, and has now expanded to include virtual power plants (VPP) and renewable energy certificate trading. The company announced 15 new projects in the global energy market across Australia, Asia, Europe and the US in 2019. Dr Jemma Green, co-founder and
executive chairman, Power Ledger, says, “We recently announced a large-scale rollout of our VPP platform through the National Electricity Market (NEM) in South Australia, teaming up with wholesaler energy retailer Powerclub, solar panel provider Natural Solar and the world’s largest solar battery provider, Sonnen. We are excited about the upcoming projects in France and Italy in the new year.”

In India, the Uttar Pradesh government has partnered with Power Ledger to pilot solar energy trading by integrating the blockchain with smart meter systems. Phase-I of the project is in development and aims to establish a two-sided energy market. Numerous other such initiatives have been taken in the country, while more are being planned. The utility company BSES Rajdhani Power Limited, for instance, plans to use a blockchain-powered ledger for a New Delhi based pilot project for P2P solar power trading.

The blockchain can be a boon for electric vehicles (EVs) too, because of the scope for decentralisation. Besides doing away with the need for a centralised EV charging infrastructure, it eases trading between consumers and charging stations or transport providers.

There need to be globally accepted laws and regulations in favour of renewable energy adoption to boost the sector. Smith says, “A new law was passed in November 2019, which requires rooftops in Brooklyn to have either solar panels or greenery, or both. It mandates this not only for buildings that are newly constructed but also for the ones that are going to get a renovated roof. Also, across the entire state of California, it has been mandated (as of January 1, 2020) that in all new residential constructions, the roofs must have solar panels. So because of these changes, individuals will now be able to produce their own solar energy. Blockchain technology is very important to be able to track energy production and consumption.”

Regarding Brooklyn Microgrid’s 2020 projects, Smith says, “In New York State, only utilities or energy service companies are allowed to transact energy for money. However, we have just been given the approval to have a pilot programme for 2020 in which we can transact only in energy. We will create a local energy marketplace comprising prosumers. So, we will have people that have solar panel arrays and consumers that want to purchase the solar energy that the prosumers generate. Once we do that, we will want to expand our local energy marketplace throughout New York City, and blockchain technology is very important for us to be able to make that happen.”

That said, for the blockchain to be successful on a large scale globally, several issues need to be solved. With P2P trading, many new payment platforms for prepaid meters and pay-as-you-go solutions may come up. Proper governance is necessary to ensure the smart management of energy needs and to maintain power system stability. Blockchain technology eliminates the need for a third party. This challenges traditional market roles like those of metering point operators and suppliers. Smart grids need user information, which must also be governed by strict protocols to maintain user anonymity and ensure privacy.

Solar energy share in power sector stands at around 2 per...