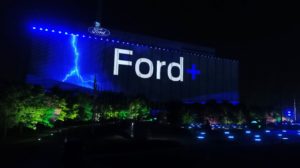 Ford Motor Co has revealed its plans to accelerate investments in the electrification of its vehicles by more than a third, aiming 40 per cent of its global vehicle volume to be fully electric by 2030.

In a release, the automaker maker said it would be accelerating investments and increasing planned total spending on electrification, including battery development, to more than $30 billion by 2025 “while deriving efficiencies from Ford’s flexible EV architecture and modular technologies.”

This comes under the company’s new plan called Ford+, through which the company expects investors to treat it more like a technology company.

Much of the 40 per cent electric vehicle sales target will come from Europe, where the company has pledged to convert its entire passenger vehicle lineup to electric power by 2030.

The company said that at the core of those capabilities is Blue Oval Intelligence, Ford’s next-generation, cloud-based platform for integrating electrical, power distribution, computing and software systems in connected Ford and Lincoln vehicles.

Ford said it will also aim to develop EV batteries under the “IonBoost” brand, from lithium-ion versions to lithium-ion phosphate for commercial vehicles and eventually low-cost solid-state batteries in partnership with startup Solid Power, in which the automaker has invested.

CEO Jim Farley expects Ford to cut battery costs 40 per cent by mid-decade. The company also expects to deliver an 8% adjusted EBIT (earnings before interest and taxes) margin in 2023.

Ford had recently announced a joint venture with SK Innovation, BlueOvalSK, which would be focused on building batteries and arrays at two factories in the US.

The company also expects to have about 1 million vehicles that are capable of receiving over-the-air system updates on the road by the end of this year, exceeding Tesla’s volume by July 2022, and scaling it to 33 million by 2028.

UK Vauxhall Car Factory To Get a 100-Million Pound Investment To...