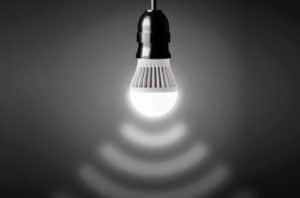 The lighting industry has been evolving at a rapid pace over the last few years. With significant improvements in technology, LEDs are now a great option to traditional lights.

LEDs have become ubiquitous electronic products by virtue of their energy efficiency, versatility and environment-friendly nature. They are in demand as the number of advantages offered by them beat those offered by traditional incandescent bulbs and compact fluorescent lamps (CFLs). There have been tremendous advances in LED technologies in the past few years, with rapid changes in product designs, features, efficiencies, etc. As a result, LEDs are expected to change the dynamics of lighting in every sector, including industrial, residential, healthcare and automotive.

Let’s discuss some significant technological trends that will create a host of opportunities in the lighting market.

The Internet of Things (IoT)
The IoT not only connects computers or smartphones, but also other gadgets that are Internet-enabled, including lighting fixtures like LEDs. To be more connected and efficient, LEDs need to add a few sensors or cameras, as well as data connections. This enables users to remotely regulate the lights as per their requirement, or to program the lights to switch on and off at specific times.

Products that are IoT enabled also give users updates on the whole operation, by collecting data and recording usage patterns to create a better lighting experience. The embedded sensors and automated control functions can monitor and control the brightness and colour temperature of the LED lights. Besides, they respond to an occupant’s presence/movements, and to the changes in ambient daylight levels.

Li-Fi (Light-fidelity)
Li-Fi and Wi-Fi both transmit data electromagnetically. Li-Fi uses light whereas Wi-Fi depends on radio waves to transmit data wirelessly. However, Li-Fi systems are much faster than Wi-Fi. In the case of Li-Fi, light bulbs are used as routers to enable data transfer at speeds of over 220GB per second. Li-Fi enabled LEDs are used as visible light transmitters since they are much more effective for higher speed wireless networking and illumination. Yet, despite the benefits, Li-Fi has a few disadvantages, such as the total reliance on the light for the smooth operation of the Internet, some security issues, signal restriction when passing through walls, not being too efficient during daylight (natural) hours because it disperses light beams emitted by LED lighting, etc. Nevertheless, the combination of Li-Fi and LEDs for ultra-fast wireless data transfer has a potential to change the dynamics of the LED lighting industry.

Human-centric lighting
LED-based human-centric lighting is controllable and tunable across a spectrum of correlated colour temperatures (CCTs), and can have a positive impact on indoor environments. Such lighting is capable of stimulating particular biological responses in us as it is based on our circadian rhythm. In the case of human-centric lighting, users can adjust the light colour, intensity and colour temperature in tune with the Earth’s natural cycle of day and night. For indoor environments, the light appears with more blue components or higher colour temperatures, to mimic the daytime circadian cycle outdoors. And as evening sets in, the light has higher amber and red components, to mimic the night-time circadian cycle. This tuning of lights can improve the mood, concentration, energy, and sense of alertness of an individual. Human-centric lighting has multiple applications – in the industrial sector, to minimise fatigue and errors; in the healthcare industry, to improve patients’ overall sense of well-being; and in educational settings, to increase students’ alertness during class hours.

Wireless lighting
Wireless lighting technology is picking up fast, by which LED lighting fixtures can be controlled without cabled connectivity. Such fixtures are recommended for green outdoor lighting, and especially for retrofit projects. They consume very little energy, and at the same time, release minimal heat, which helps in controlling the carbon dioxide produced by the lights.

Reverse-wired LED cooling
An interesting development with respect to LEDs is that they can be used to cool heat sources that are close by. This new application has been demonstrated by researchers at the University of Michigan. They used an infrared light-emitting diode (IR LED) with its electrodes reversed to cool another device just nanometers away. The reverse connection can not only control the LED from emitting light, but can also induce the LED to curb the thermal radiation that it would be emitting. Researchers claim that this can help to cool down electronic devices, such as wearables and mobile devices. This approach will be very effective in taking the heat away, particularly in cases that include various small devices and transistors in small enclosures, where heat dissipation is critical and needs to be fast. With improvements in cooling rates, the new approach can result in efficiency and enhanced performance of these devices.

LED material
Graphene is one of the revolutionary new materials that has emerged. With the addition of graphene, LED lights have a better brightness quality and are able to last 10 per cent longer. Besides, graphene is effective in dissipating heat, and helps in reducing energy use.  Researchers say that the high conductivity property of graphene makes the light more bright, longer-lasting and more efficient.

Smart LED bulbs
Smart LED bulbs are equipped with various features, though every smart bulb does not work in the same manner. Different types of bulbs offer different functions and work on diverse formats. Some LEDs require a hub to connect while some work on Wi-Fi or Bluetooth. They  can also be connected to Amazon’s Alexa, Google Assistant, Apple’s Homekit, etc. With voice commands, they can control home lighting with ease and convenience. In most cases, smart lighting systems do not need any new or additional fixtures; the bulbs can be screwed into the existing fixtures. Based on recent developments in the lighting industry, consumers will soon be able to integrate LEDs into security cameras, and other electronic devices.

Going forward
Lighting has come a long way from the intense white light emitted from a regular tubelight or  the dull yellow light of an incandescent bulb. Today, LEDs have changed the concept of lighting. These changes are being fuelled by constant technological advances. The capital cost of LEDs is much higher compared to conventional lighting options, but the price points are gradually dropping, making these lights affordable and accessible.

Besides, LEDs are available in a wide range of designs, functions and sizes, which  make it  possible to use them in varied applications. As per a report by technavio, the LED market will grow by US$ 25.78 billion during the period 2020-2024. To sum up, LEDs are slowly but  surely replacing traditional lights, and will continue to do so at a quicker pace in the future, thanks to the tech trends listed above.