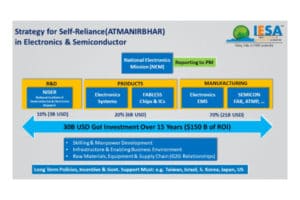 India Electronics and Semiconductor Association is conducting its flagship event Vision Summit 2020 for the first time virtually keeping in mind the convenience and safety of participants across the globe. This would be the 15th edition and the current years’ theme is ‘Intelligent Electronics: Driving self-reliant digital economy : Transforming 1.3 Billion Lives.’

The IESA Vision-Summit-2020 is looking forward to drive initiates and policies for the Intelligent Electronics & Semiconductor products and solutions. The would in turn push the government of India’s vision of a self-reliant or an #AtmaNirbharBharat. India’s next decade with us being ‘Atmanirbhar’ in Technology will be with Agri-Tech, Tranformative Education, Med-Tech, Automative, Strategic Security towards the ATMAS (Soul) of Self-Reliant India. Intelligent Electronics is the train, powered by Semiconductors taking ATMAS towards the destination of $1Tn Digital Economy goal for India.

Electronics Production Market (TAM) alone is expected to contribute USD 300 Bn (30%) to Digital economy in 2025, according to a recently released IESA report. It has also been revealed that Karnataka has an estimated GSDP of $220 billion. This also contributes 64% to India’s ESDM exports and 10% to India’s electronic industrial output.

Karnataka is also claimed to be the India’s largest chip design hub, with 85+ chip design companies. 70% of India’s chip designers are based out of here. As stated in the KESDM policy 2017-2022, there is a target to stimulate the growth of 2000 ESDM startups during the policy period and generate 20 lakh (2 million) new jobs by 2025 via Skill Development, Quality Infrastructure, Ecosystem Support, Encouragement to Start-ups, and Ease of Doing Business.

Sh. Ajay Sawhney IAS, Secretary, MeitY, Govt of India in his vision talk on MeitY’ s Mighty Vision said, ‘We have been making efforts to grow the entire ecosystem. Last year, we were able to bring out the National Policy of Electronics 2019. Even during the pandemic, we came out with schemes that were made available from 2nd April and in June, we opened for applications. The responses met our expectation – in fact, it was higher than what we had expected at the inception of the scheme. Over the next 4-5 years’ time, we expect the incremental production – over and above the base year 2019-20, to be around 11.5 lakh crores and the exports to be more than 8 lakh crores during this period’.

The Vision Summit also highlighted the primary thought from all the Visionaries from the world that India should have set up ‘National Electronics Commission’ reporting to the Prime Minister of the Nation as a long-term strategy to make India a global powerhouse in Electronics and Semi conductors.