Tata Motors rolled out the first batch of the electric variant of its compact sedan Tigor from its Sanand facility in Gujarat. The first batch of e-Tigors are being produced for the Energy Efficiency Services (EESL), which had placed an order for 10,000 electric sedans in October, and are part of the first 350 orders that the company had won in the first phase. 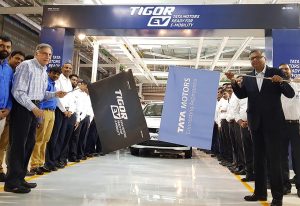 “As we work together to build the future of e- mobility, I am confident that our customers will respond very favourably to this electric model,” Chandrasekaran, who flagged off the first batch of the vehicles, reported PTI.

The government is planning to have only electric cars by 2030 in its efforts to reduce both oil imports as well reduce carbon emissions to a significant extent.

The third largest passenger car-maker had become the L1 bidder in amid stiff competition and won the bids for 10,000 e-cars floated by EESL in September as the other bidder, Mahindra’s, quoted Rs 2.3 lakh above the former’s and was initially out of the race.

But later it was given the option to match Tata Motors’ price and accordingly chose to sell 150 e-Veritos to EESL. Mahindra has already supplied some of them.

The EESL order first mandated supply to be completed on/before November 30 but was later postponed to December-end.

For phase 1, Tata Motors is required to deliver 250 Tigor EVs, for which it has received a letter of agreement. For an additional 100 cars, the agreement is expected to be issued shortly by EESL, the company said.

“With e-Tigor, we’ve begun our journey in boosting e- mobility and offering a full range of e-vehicles to customers. This tender has effectively paved the way for connecting our aspirations in the e-mobility space with the vision of government,” Butschek said.