The bidders have proposed to undertake integrated manufacturing of Polysilicon to 4,000 Mw capacity solar modules

Jindal India is seeking the lowest incentive figures under the Production Linked Incentive (PLI) for solar modules. The group is seeking incentives as low as approximately Rs 1,390 crore. Adani Group’s solar arm, on the other hand, has emerged as the L4 bidders with a bid of approximately Rs 3,600 crore for the same PLI.

Similarly Shirdi Sai Electricals have made a bid of Rs 1,875 crore, whereas Reliance Industries solar arm has bid Rs 1,917 crore. The bidders have proposed to undertake integrated manufacturing of polysilicon to 4,000 Mw capacity solar modules. It is worth mentioning here that India currently has no wafer production facility.

A total of 16 bidders, as per The Indian Renewable Energy Development Agency (IREDA), have qualified for the scheme. IREDA will now be deciding about the PLI to be disbursed to these bidders. 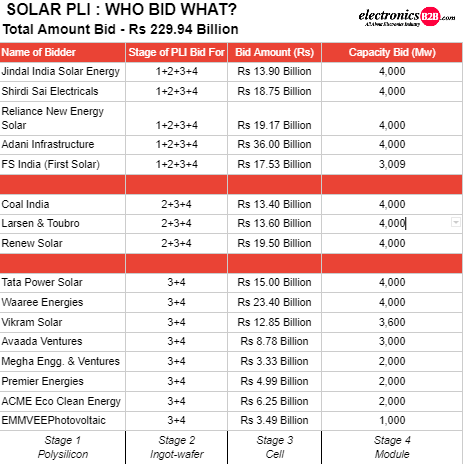 Preference, as the agency clarified, will be given to the bidder who has requested the lowest incentive for the capacities bid. The Cabinet, in April 2021, had approved a Production Linked Incentive (PLI) Scheme, namely, ‘National Programme on High Efficiency Solar PV Modules’, with an outlay of Rs 4,500 crore.

Unless approved by the Ministry of New and Renewable Energy (MNRE), the qualified bidders will not be allowed to invest in, merge with, or acquire projects from other qualified bidders who have been awarded the incentive under this PLI scheme.

Central Electricity Authority (CEA) had earlier indicated in their Optimum Energy Mix report that 2,80,000 MW capacity from solar energy will be needed by 2029-30. To achieve the target, around 25,000 MW solar energy capacity is needed to be installed every year, till 2030.

Total To Acquire 50 Per Cent In Adani’s Solar Business For...