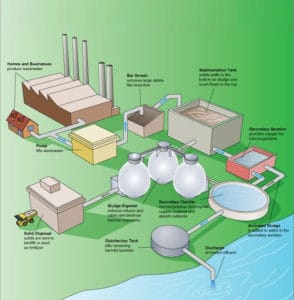 Wastewater need not be wasted – it can be treated to address the energy problems of the world.

According to a recent study by the United Nations University Institute for Water, Environment and Health (UNU-INWEH), some 380 billion cubic metres of wastewater are produced annually worldwide. This figure is projected to grow by roughly 24 per cent by 2030 and 51 per cent by 2050. In this study, it has also been stated that the volume of wastewater roughly equals the annual discharge of water from the Ganges river in India. This is the water produced daily from using showers, wash basin sinks, washing machines, dishwashers and toilets, which we often pay little heed to. The American Biogas Council estimates that roughly 80 per cent of the energy contained in wastewater is thermal, 20 per cent is chemical, and less than one per cent has the potential for hydraulic power generation.

It is necessary to treat this water before it can be discharged into nature since it contains many types of contaminants from households, agriculture, and industries. But when treated properly, this wastewater can act as a valuable resource for generating energy, besides recovering nutrients and precious metals. By separating the minerals beforehand, their deposition in tanks and pipes and hence the potential damage to treatment equipment can be avoided. One of the United Nations’ Sustainable Development Goals (SDGs) is reducing untreated wastewater as well as increasing its recycling and safe reuse around the world.

The treatment plants work on anaerobic digestion. Organic materials in wastewater from sewage systems, generally known as sludge, usually undergo a pre-treatment process called thermal hydrolysis to maximise the amount of methane that can be produced. This is also done to optimise cost-effectiveness of production. In anaerobic digestion, microbes decompose sludge in the environment, like a landfill, which is devoid of oxygen. The biogas produced from this process, containing large amounts of methane, is then used to generate energy instead of being released into the atmosphere, which prevents pollution. Although carbon dioxide is a byproduct, the net emissions are almost zero when compared to the clean energy produced.

This energy can then be used to provide heat for cooking, or providing electricity, and even powering cars. Bio-based fuels generated from further processing are beneficial in replacing gasoline and diesel fuels as they reduce carbon footprints. The treatment plants can use the energy generated from their own sludge so as to be self-sufficient. This can prevent the treatment facilities from depending on a continuous supply of energy from utility companies.
Since wastewater contains nutrients like nitrogen and phosphorus, the solid part after treatment can act as manure to help plants to grow. Also, industries can directly extract ammonia from wastewater, where the source is mainly urine, for producing fertilisers after the removal of pathogens. Combined with other organic wastes that are used to produce biogas, the fertilisers can be used in horticulture, among other processes. There is a lot of research going on in this domain for the commercialisation of all such activities.

Conventional treatment methods of wastewater treatment require a great deal of energy and even produce toxic sludge, which can become a barrier for adoption. The yield varies according to the amount of content present in wastewater. Many developing countries do not have the infrastructure needed for proper management. But with the availability of technology, wastewater is capable of producing a lot more energy than it takes to treat it. These methods can eliminate usage of harmful chemicals and micro-organisms, as well as unwanted byproducts.

Small-scale implementation of waste-to-energy solutions can help organisations in becoming net-zero energy consumers. Municipalities in various countries need to adopt this technology at a local scale. The institutes can also create a new revenue stream from selling surplus energy. Globally, numerous companies are operating in the field of wastewater treatment for energy production including Xylem Inc., Fluence, Veolia, GE Water, RWL Water Group, AAT Biogas Technology, PlanET Biogas, and so on. These firms work under proper legislative standards set for collection and transportation, treatment and finally the discharge of wastewater into the environment. The ultimate purpose is to prevent imbalance in the natural environment. Investments need to be made for exploring concepts that extract energy from wastewater and improve technology transfer.

In its constant attempts to adopt new methods for increasing biogas yield, the Glenelg Wastewater Treatment Plant, west of Adelaide, Australia, recently started using the expired beer from South Australian Breweries. The procedure involves releasing the beer into the site’s digester tanks, where it is mixed with sewage sludge, generating biogas.

A giant neutral wastewater treatment facility operating in Denmark serves the local people of the area by supplying enough electricity and thermal heat needed for different day-to-day purposes. Metro Vancouver in Canada has been working to enable municipalities to use energy from sewers for heating buildings in the vicinity. In another instance, Amadori SpA, an Italian agro-food processor, chose a custom-designed solution from Fluence to reduce its expenditure on energy and become eco-friendly. Recently, as a part of sustainable city development, it was announced that sewer pipes carrying wastewater from a meeting complex in Colorado in the US would be used to generate clean power, which is likely to prevent the emission of nearly 2,600 metric tons of carbon dioxide into the atmosphere.

In India, back in 2014, the government had announced that sewer networks would be developed and connected to a Sewage Treatment Plant (or wastewater treatment plants) at community levels or at a central location for streamlined sewage collection and disposal.
According to SDG INDIA Index and Dashboard 2019-20, India’s Total Primary Energy Demand (TPED) is expected to grow by 63 per cent by 2030 due to increasing urbanisation and development of smart cities. Therefore, an increased focus on the domestic manufacture of renewable energy equipment is imperative. Many new-age startups have begun work in the energy sector of India. One example is the Gujarat based-startup REVY Environmental Solutions, which works on efficient degradation of any bio-material into methane. The microbial consortia from the company act as a catalyst in anaerobic reactors, to produce bio-gas. Many such initiatives will be needed to provide an impetus to the much needed self-reliance in the renewable energy sector and facilitate the Indian government’s goal of ‘Power for All’.