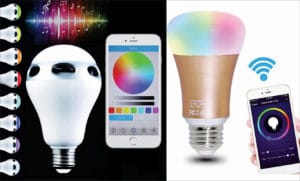 With the government vigorously pushing for sustainability and energy-efficient systems, coupled with a new wave of digital innovations, smart LED lighting will soon become mainstream in India.

LED lights are slowly and steadily reducing the dominance of traditional lighting like fluorescent and incandescent lights in India. A few years ago, they were largely viewed with scepticism with regard to their functionalities and efficiencies. However, with their ability to change the energy consumption pattern, saving both power and money, LED lights have changed the lighting industry. This shift has been validated with the transition from analogue to digital systems. LED lights can be interfaced with connected intelligent networks and digital controls. As IoT infrastructure matures, intelligent lighting will get upgraded with sensors and embedded microchips. Unlike other lighting sources, smart LED lighting systems can manage, control and interact with the environment with real-time feedback.

There is increasing integration of LED based smart lighting solutions in commercial and residential buildings to reduce installation, maintenance and operating costs. The demand has also increased due to the government’s Smart Cities Mission, which facilitates the use of intelligent solutions for street lighting and public spaces like airports, gardens, etc.

The benefits of smart LED lights
Over the last few years, the Indian lighting industry has undergone a significant transformation owing to LED lighting. LEDs have made lighting more energy efficient and intelligent, and this has opened up a whole new range of applications, such as Li-Fi and connected lighting.

Sumit Joshi, vice chairman and managing director, Signify Innovations India, shares, “The digital capabilities of LEDs enable tremendous customisation in terms of light output and applications, and have also brought illumination and IoT together, allowing lighting systems to be a part of the Internet of Things (IoT). This has led to the emergence of connected lighting, which has transformed lighting from a product to a fully integrated system that can seamlessly connect with a wireless network or Ethernet, and is capable of capturing and transmitting data from other devices.” Smart LED lighting can offer data insights and analytics, thereby enabling users to measure and control the efficacy of operations. Such systems can have multiple applications in smart cities, buildings and homes, making lighting more intelligent and personalised.

Currently, the LED market is relatively new. But with the government offering incentives, there is a big opportunity for companies and investors. LEDs are the best option when it comes to reducing the impact on the environment, as they use less electricity. They last longer than traditional lights and can operate for more than 20 years. Smart LEDs can be controlled with the help of a built-in application, which can be controlled from a smartphone app. The ‘mood’ of a room can be set by changing the intensity of the lights. The colour and the brightness/dimness of the light can also be changed to match comfort levels. Besides, smart LEDs do not involve a complex installation process, unlike other technologies. Once they are connected to the light source, apps can be downloaded on the smartphone to control these lights, regardless of the distance or location.

Technological advances
It is interesting how the traditional concept of light bulbs has evolved over the years. Bulbs are generally just turned on or off. But with the arrival of many new wireless technologies, such as the Internet of Things, Bluetooth, Wi-Fi, Li-Fi, etc, lighting has changed dramatically. Now it is possible for LED lighting to be networked with high-value digital controls. LED lights are available with various features, such as automatic on/off controls, colour adjustment and voice control options, etc. Besides, LED lights are a low-voltage semiconductor device, which is one of the reasons they are inherently friendly to digital controls. They can be easily connected with microcontrollers, unlike other conventional light bulbs. In short, LED devices are well adjusted with the sensors and microprocessors that help to make the lighting systems smart and intelligent.

Unlike the older lighting systems, smart LED technologies help to collect data/information and maintain a record of users and the environment. The process helps in data analysis, and then adjusts the devices accordingly. These technologies enable communication with any individual switching point, and can also help to record the number of hours for which LED luminaires work at this point. Smart lighting systems can display the power failure details of a switching point and provide reports on the energy saved, lamp failure, actual hours of operation, uptime (per cent), etc.

An interesting feature of smart LED bulbs is that they can be connected to a home’s Wi-Fi, without the need for a hub. Features like a colour picker allow a smartphone’s camera to be used as a scanner so that a bulb can match colours. These bulbs are compatible with other smart home products such as Apple HomeKit, Amazon Alexa and Google Assistant.

Challenges of smart LED lighting
While LEDs have captured a big segment of the lighting market already, connected LED lights are still at a nascent stage owing to several factors such as limited Internet penetration, low awareness among consumers about their benefits and applications, and the higher price points compared to basic LED lights. Besides this, local manufacturers are facing intense competition from the influx of Chinese products into India. While the Chinese products are attractive in terms of look and design, their quality is questionable and sub-standard. Yet, low price points easily attract consumers, which is a major setback for the growth of the local LED lighting industry.

Dwivedi says, “The challenge initially was to increase the affordability and adoption of smart and energy efficient LED lights. To overcome this, EESL facilitated bulk procurement of LED lights, lowering the cost of the product, and introduced its unique pay-as-you-save (PAYS) model making the LED lights affordable and their adoption easier. Another challenge was the lack of appropriate infrastructure for the installation of smart LED streetlights.”

India is still primarily assembling smart LED bulbs, and not manufacturing them—90 per cent of the country’s output is only assembled in India. Most of the LED lights and parts are sourced from outside. What hinders local manufacturing is that the GST on LED lights and raw materials ranges between 18 and 28 per cent, which hardly makes for a lucrative business environment. The absence of technical standards and regulations for the lighting industry is another disincentive for manufacturers.

The brighter side
There is little doubt that the smart LED lighting industry is witnessing positive growth in India and has the potential to grow at a reasonably high pace in the coming years. Due to increasing awareness, the demand for connected LED products is higher in the metros at the moment, and is expected to grow across Tier II and Tier III cities too.

Despite the commercial and industrial sectors accounting for a larger portion of the smart lighting market, there is going to be robust demand for smart LED lighting from the residential sector. Joshi opines, “In India, smart lighting for homes is currently a ₹ 1 billion-plus market, and is expected to grow by 45 per cent over the next three years, as many more houses will adopt connected lighting in a major way. While smart lighting for homes constitutes a very small share of our overall business right now, it has a lot of potential for growth in the future, owing to increasing urbanisation and Internet penetration.”

Office lighting is another high-potential application area for smart lighting, which is expected to boost the market. Joshi adds, “As the business scenario in India matures, the expectations of a new generation of employees, from their workplaces, have increased and we also see employers adopting new technologies to boost their employees’ engagement and productivity. These developments have led to the emergence of smart and connected offices, wherein the ‘Internet of Things’ drives new ways to collaborate, innovate and socialise. Hence, it is not surprising that in today’s fast-changing business environment, new ideas such as connected lighting are being implemented in workspaces that can facilitate a culture of innovation based on collaboration.

India is considered to be one of the biggest smart lighting markets in the Asia Pacific region. The evolution of smart cities, the smart street lighting programme and several other government initiatives, are propelling the growth of connected LED lighting in India. There is growing awareness about the advantages that technologies such as wireless optical networking data transmission, Li-Fi, and the Internet of Things (IoT) offer. Many industry experts claim that there will be a massive demand for more energy efficient and intelligent lighting in the next five to ten years. According to a report from the Electric Lamp and Component Manufacturers Association (ELCOMA), the Indian LED market is expected to grow to ₹ 261 billion by 2020, which is approximately 80 per cent of the total lighting industry.