Battery storage is the backbone of the renewable energy sector, and can help in the
transition to clean and sustainable energy systems.

The shift to renewal energy is the only way to create decarbonised electricity, which will herald the end of coal based power. The government’s push towards adopting renewal energy has led to the rising demand for energy storage systems. Despite the strong potential in harnessing clean and green energy, renewal energy sources have their limitations, and have not yet become a fully reliable alternative. The generation of electricity from such sources as the sun and wind relies entirely on favourable environmental conditions.

Good electricity can be generated only when it is sunny or windy, and any excess energy goes to waste. In such a scenario, batteries play a significant role in optimising the entire power system by storing the excess energy and releasing it during periods of peak energy demand. Battery storage systems can have various applications, such as the integration of renewable energy generating systems with legacy grids, other grid applications and electric vehicles.

The importance of battery storage
Storage systems play the significant role of balancing the demand and supply of power. They generally consist of two electrodes with an electrolyte capable of both storing and discharging energy, as and when required. Therefore, batteries introduce flexibility and reliability into electricity distribution. As the sun and wind cannot be turned off and on, as per our requirements, batteries intelligently handle the unpredictable patterns of nature. They store the surplus power generated when the sun is bright and the wind speed is high during day time, and use it at night when the demand is high. The process helps in creating an uninterrupted power supply. Besides, batteries are very swift to respond to any electrical needs and do not take long in discharging power, as opposed to traditional fossil fuel sources that take a considerable amount of time to initiate the process. All in all, battery systems contribute considerably to enhance the power quality and reduce our carbon footprint by decreasing our dependence on fossil fuels.

Sharing his insights, Rohit Kumar, head of Indian subcontinent, REC Solar, says, “The biggest challenge with renewable energy—be it solar or wind—is the intermittency of power generation, and the best way to mitigate this is through energy storage, which is essentially batteries for the renewable energy system. And though batteries have been in the consumer electronics market for a long period now, it’s only now that we are witnessing a manufacturing boom (something that we saw in solar five years ago), where the economies of scale are driving the market prize down. And one of the things that the Electric Energy Storage (EES) sector can learn from solar is not to let market demand lead to compromising on the quality of products, as unlike the solar panel, batteries need a lot more careful disposal and are environmentally hazardous.” 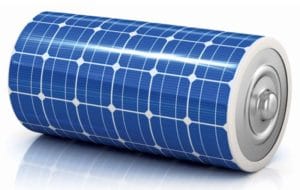 How to identify the best battery
It is not easy to choose the right model of battery for renewal energy systems. Even with almost similar specifications, the life span and performance of one battery can differ a lot from another. Therefore, it is critical to evaluate the product’s properties and consider the following parameters.

Depth of discharge (DoD): This refers to the degree to which a battery gets depleted. The battery should not be drained fully because of its chemical composition. The DoD is closely related to the cycle life of a battery. When you fully discharge the battery, it affects the life span of the battery. Therefore, it is recommended to go for a higher DoD to be able to extract a battery’s capacity more efficiently.

Life span: After a certain point of time, the battery cannot effectively hold a high charge. The performance starts to degrade over time. So, one should check the warranty that guarantees the number of cycles or years of operation. One should also bear in mind that the bigger and denser the battery, the more high-quality electricity it can store. But if anything goes wrong with the battery, the potential of damaging other critical electrical equipment is high.

Types of batteries
Various types of batteries can be used for storing renewal energy, such as lead acid, lithium-ion, flow, sodium based, nickel based, salt water based, etc. As per recent studies, lithium-ion batteries represent more than 80 per cent of the installed power and energy capacity of large-scale energy storage applications. Nickel and sodium based batteries represent around 10 per cent, while lead-acid and other chemistries account for the rest of the large-scale battery market.

Here are some characteristics of the common batteries used in renewal energy systems.
Lead acid: This is a popular battery technology as it is the least expensive option available in the market. These batteries use tried and tested technology. They are dependable, despite their short life span.

Flow: These batteries have a water based solution of zinc-bromide sloshing around inside them. The biggest appeal of this kind of battery is that it can be charged immediately. Simultaneously, it can recover the used energy for re-energising the battery. This is a relatively new entrant in the battery industry.

Sodium based: These batteries are free from heavy metals. They use salt, and at times salt water, to produce toxin-free and long-duration power. Unlike other batteries, the charge can be completely drained out, without affecting the system. Since they do not use metals or acids, they do not require to be disposed of with any special methods. They are not flammable and can be easily recycled.

Nickel based: Nickel based batteries are also known as nickel-cadmium (NiCd) batteries. They are simple units without complex processes. They are reliable and ideal for harsh climatic conditions. They are mostly recommended for demanding applications.

Prospects of battery manufacturing in India
India has become one of the top renewable energy producers globally, with further ambitious expansion plans. The country has about 7GW of installed renewable energy capacity, and has set itself a mega target to build up renewable energy capacities to the tune of 175GW by 2022, of which about 100GW is for solar, 60GW for wind and the remaining quota for hydro, among other options. Besides, India is planning to call for bids for 500GW of renewable energy generation capacity by 2028 to achieve its goal of 40 per cent electricity generation from non-fossil fuels by 2030. These developments are directly impacting the battery energy storage industry in India. Besides, the government is planning to establish a battery making capacity of 40GW to give a fillip to its electric vehicles and renewable energy initiatives. The future of the battery industry looks promising as vigorous efforts are being made to indigenously develop energy storage technologies and systems.

Sebastian Johansen, senior technology expert of Finland based clean energy major, Fortum Corporation, talks about how batteries are indispensable in the renewal energy sector to create a decarbonised society.

EB: Tell us about the significant role batteries play in the renewable energy sector.
Let me start with quoting our CEO Pekka Lundmark, “The urgent need to respond to climate change will impact the whole world. Decarbonisation is needed in all sectors and clean electricity can be a significant enabler. Hence, we see the 2020s becoming the decade of electricity.” Among other storage technologies, batteries are one of the important enablers to decarbonising society. They are needed when more intermittent or renewable energy is penetrating into the electricity sector. The batteries can help to provide part of the needed flexibility in the electricity system, enabling more clean energy to be produced and stored for later use.

EB: Which is the most sought after battery technology for renewal energy systems?
Lead acid batteries have been the most common electrochemical battery technology until now but lithium-ion is rapidly becoming mainstream, largely driven by the electrification of the transport sector, especially electric vehicles. The superior energy density, weight ratio, lifetime, availability of raw materials and cost decrease have resulted in this development. The focus is now on improving the energy density, safety, production capacity and costs, even further. Several new promising technologies within the lithium-ion family, e.g., the evolution of the cathode chemistry and solid state electrolytes, are surfacing but there are also a vast number of other new electrochemical technologies that have the potential to disrupt the industry. These include flow batteries and sodium related technologies. There are still some safety concerns with respect to the lithium-ion batteries, but these are likely to be solved with the next generation of these batteries, with improved cell construction, control electronics, and digitalisation and cooling designed for dedicated use cases, i.e., preventive mitigation of risks.

EB: What are the technological advancements in battery storage?
With the increasing amount of lithium-ion batteries in the market, we see recycling becoming more important. Today, with the state-of-art recycling technology in use, it’s possible to recycle over 80 per cent of the materials in a battery. How much can be recycled depends on the solvents used in the battery’s manufacture. There are also existing new water based Li-ion chemistries that can be recycled by up to 95 per cent, but these are not yet commonly used.