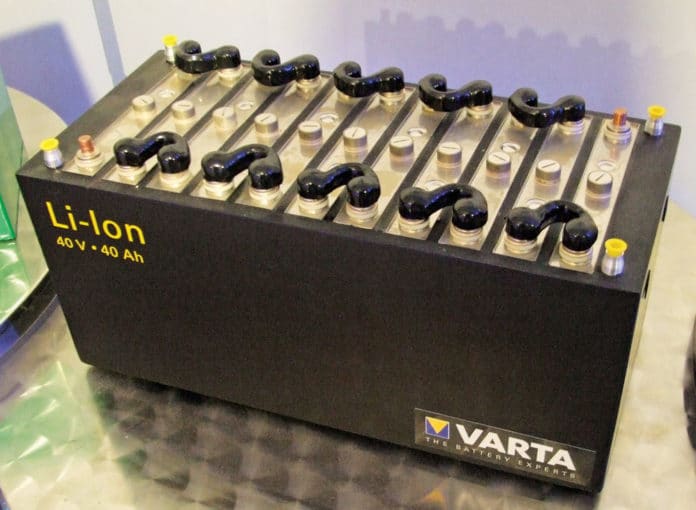 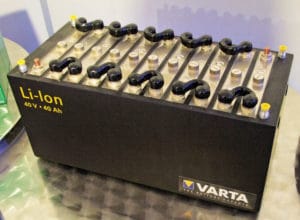 Technology research firm IDTechEx forecasts demand for Li-ion batteries will grow almost tenfold between 2020 and 2030. Although lithium-ion technology is currently dominating the market, with further research and collaboration we can expect greener alternative materials that can be used for commercial applications in the future.

Just like any other battery, Li-ion variants are made up of a combination of cells. Each cell consists of an anode and a cathode, separated in an electrolyte solvent. The cathode is made up of a lithium compound (such as lithium cobalt) and the anode is typically built from graphite. The electrolyte is usually a lithium salt (lithium hexafluorophosphate) in an organic solvent. During discharge, lithium ions move from the cathode through the electrolyte to the anode, and vice versa when charging. The batteries come in a wide variety of sizes and shapes, and need a protective circuit to limit the peak voltage.

Currently, owing to the concerns about climate change, we need to develop a sustainable and low-carbon value chain for batteries. The storage of energy still heavily relies on heavy metals in batteries. The problem with Li-ion batteries is that besides being expensive, the raw materials required are available only in underdeveloped nations, where the extraction is often done in unsafe working conditions, along with a huge amount of water getting wasted in the process. Sometimes, toxic chemicals leak into the water table.

The production process has a large carbon footprint and disposing Li-ion batteries is a huge problem. It is both a health and a safety hazard if these batteries get damaged or incorrectly charged, as that can lead to explosions and fires. Besides, with China being the dominant player in Li-ion battery manufacturing and in the supply chain too, the coronavirus pandemic has led to a series of disruptions for importers like India.

As batteries will be the basis for future non-fossil-fuel based mobility, there have to be defined sustainability criteria for battery design along with a focus on reuse and recycling to boost a circular economy, especially in developing and underdeveloped countries. Batteries in electric vehicles (EVs) have to be swapped out of the cars even though they still have a large amount of charging capacity remaining. But the cost of recycling Li-ion batteries is higher than manufacturing them from scratch. Also, there needs to be a safe way of disposing them. If we aim to move towards a more sustainable future, these issues need to be fixed. There is a dire need for effective coordination between public, private and civil society organisations in the formulation and eventual implementation of green policies, prior to widespread deployment of Li-ion batteries. It is in this context that the Global Battery Alliance was founded in 2017—to enable public-private partnerships across the world.

There is a lot of research going on to find alternatives to Li-ion batteries. Based on the choice of materials, properties like energy density, voltage, charging time, life, and safety of a battery can change completely. New chemical compounds are considered crucial for the construction of these alternative batteries. For example, sulphur is believed to have a great potential in this field. Lithium-sulphur batteries are economical, more environmentally sustainable to produce, safer to use, and even store more than twice the energy than their counterparts. The issue with them is that the electrodes tend to break down during charging since, being a non-metal, sulphur is a poor conductor of electricity and heat. Apart from this, these batteries degrade faster over time. But it has been observed that the addition of molybdenum makes the electrodes conductive and stable.

Not just electrodes, but substitutes for even electrolytes and other materials are being worked on. Scientists at ETH Zurich and Empa in Switzerland have examined titanium-nitride as a replacement for lithium-based electrolytes due to its high electrical conductivity. In another instance, researchers at Purdue University in the US have created a technique to turn waste polyethylene terephthalate, a recyclable polymer, into battery components. This paves the way for organic batteries.

Biomass-derived electrodes (both carbonised and non-carbonised), electrolytes and separators (the membrane between the cathode and anode) are a growing area of interest for analysis. Biomass-based binders can replace toxic halogenated commercial binders for holding the active material particles inside electrodes and ensure sustainability.
Sodium-ion is another option that has gained significant attention owing to its efficiency in grid applications. Researchers from Washington State University and Pacific Northwest National Laboratory, both US based, have recently created a potentially viable sodium-ion battery that is capable of keeping more than 80 per cent of its charge even after a 1000 charging cycles.

Numerous companies are adopting these technologies and the situation is gradually changing. Dr Scott Brown, CEO, Nexeon, a provider of silicon materials for battery applications, says, “This is an exciting time as we work with our global customers on the final qualification of our innovative silicon battery materials. The excellent progress made with silicon battery materials has enabled us to accelerate scaling up ahead of our original plan. We are eagerly awaiting additional feedback from the evaluation of the silicon materials produced.” The company uses silicon for its Li-ion battery anode technology instead of graphite to deliver lighter batteries with increased capacity. In another research programme, the University of Eastern Finland has developed a new hybrid material made up of mesoporous silicon microparticles and carbon nanotubes to enhance the performance of silicon in Li-ion batteries.

Last year, IBM developed a new type of battery that uses raw materials from seawater and is free of cobalt, nickel and other heavy metals, avoiding the hassles of mining and thereby reducing the costs involved in the process. IBM’s battery, which is at an early stage of development, has a higher power density besides low flammability as compared to lithium-ion versions. Tesla is working on a new type of lithium-ion battery construction that reduces or even eliminates the need for cobalt without affecting the recharging rates, and could have a huge impact on the current prices of EVs.

Although lithium-ion technology is currently dominating the market, with further research and collaboration we can expect greener alternative materials that can be used for commercial applications in the future.