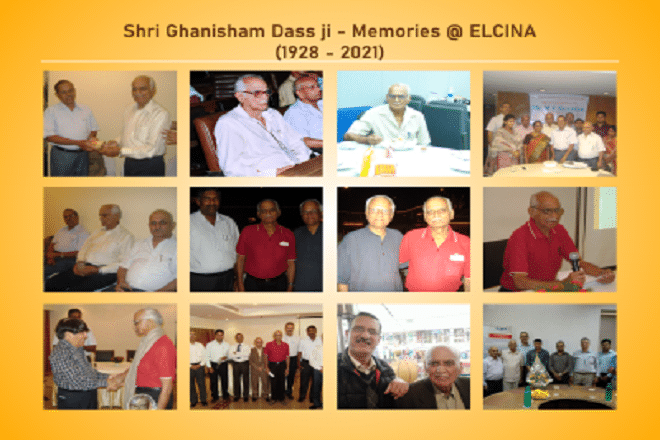 Ghanisham Dass worked from scratch to take ELCINA’s membership from a meagre number around 15 in 1975, to an impressive 250+ in 1997

Ghanisham Dass, Ex Secretary General, ELCINA passed away on Eight May, 2021. Famous by the initials GD among ELCINA members and his friends, he served as Secretary General of ELCINA from 1975 upto 1998. Subsequently he continued to serve as an Advisor and supported ELCINA Secretariat’s activities till as late as 2017 when his frail health forced him to seek full retirement.

ELCINA took birth in Bombay in 1967 but its headquarters were shifted to New Delhi in 1974, as it was strategically a better location for industry associations where policy was the primary challenge which members faced. Mr Ghanisham Dass worked from scratch to take the Association’s membership from a meagre number around 15 in 1975, to an impressive 250+ in 1997 making it the largest industry body representing electronics industry, of course with a focus on components.

It was not an easy task as he laboured to get members to sign up for membership and each Membership Form with a cheque of a few thousand rupees was worth its weight in gold. With meagre resources and a small rented office, he achieved a lot for ELCINA and won the confidence of members who supported him wholeheartedly.

He was instrumental is establishing valuable long term activities which have stood the test of time and have won the respect and appreciation of all stakeholders. These include the ELCINA Awards, The ELCINA Directory and our Monthly Magazine (now Bi-Monthly) which enabled ELCINA’s message to spread far and wide.

“We cannot miss out ELCINA House, which is the most valuable physical asset for the association and its members. This edifice was created with strong support from members who contributed enthusiastically to enable the large financial investment which was required. GD ji put his best efforts to make it a reality,” read an official statement shared by ELCINA.

Without a strong background in policy, he continued to toil to understand the complex Indirect Tax system of our country and writing and pleading with the government at all levels to change rules and taxes to facilitate electronics manufacturing.

GD ji was born in 1928 and lived to a ripe old age of 93 years. It is some solace that he lived a full life with compassion and affection for all those he worked with. His contribution towards establishing ELCINA and bringing it to its present state of eminence deserves the deepest possible appreciation. He has contributed hugely towards establishing an industry body which will continue to serve the industry and its members for a long time to come.