HP led the market with shipments of 4.3 million units and growth of 116 per cent 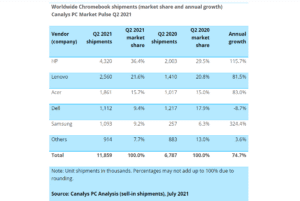 Chromebook shipments reached a volume of 11.9 million units in the second quarter of 2021, continuing to outperform similar product categories like PCs and tablets while posting a 75 per cent annual growth, as per research firm Canalys’ latest report.

Chromebook vendors have doubled down on investments in the product category and most have continued to see strong returns in terms of growth, the report said.

HP led the market with shipments of 4.3 million units and growth of 116 per cent. Lenovo took second place with 2.6 million units shipped increasing shipments by 82 per cent from a year ago. Acer secured a top-three position with a growth of 83 per cent propelling it above 1.8 million units in shipments. Dell and Samsung made up the remainder of the top five, with the former being the only leading vendor to suffer a shipment decline.

“With Chrome’s hold over the education space relatively secure, Google is set to bet big on the commercial segment this year. We expect to see a strong focus on attracting small businesses with updated services, such as the new ‘Individual’ subscription tier for Google Workspace and promotions on CloudReady licenses to repurpose old PCs for deployment alongside existing Chromebook fleets. However, with Apple eyeing to expand its M1 success into the commercial space and Microsoft launching Windows 11 later this year, the PC OS race is set to be the most hotly contested it has been in a long time,” said Brian Lynch, Research Analyst at Canalys.

The global PC market saw a growth of 10 per cent, reaching upto 121.7 million units in shipments. The report said that tablet shipment growth have begun to stabilize, with an increase in Q2 of just 4 per cent year-on-year to 39.1 million units.

Apple maintained its leadership position in the rankings in the tablet market with 14.2 million iPads shipped for a relatively flat performance. Samsung was a big winner in terms of market share growth as it increased shipments 13.8 per cent to post 8 million units shipped. Lenovo enjoyed the highest growth out of the top five at 78 per cent, shipping 4.7 million units. Amazon and Huawei made up the remainder of the leaders.

Canalys Research Analyst Himani Mukka, “Even as consumer demand for tablets undergoes an inevitable slowdown in the coming quarters, there are exciting developments to be seen in commercial deployments. Canalys expects to see stronger integration between the tablet and PC, allowing for smoother workflow transitions between multiple devices, which is especially attractive to those operating under hybrid and on-the-go workstyles.”

Foxconn Records $48 Billion Sales In Q2 Amid Rising Demand For...