To address the glaring lack of handy diagnostic devices at clinics that can help in detecting cardiovascular diseases, Anuj Sharma, founder and lead scientist of Anusandhan Technologies, invented CardioMon, a next-generation portable electrocardiography (ECG) monitor and analyser that can change the medical electronics landscape.

Myocardial infarction, or to put it simply, a heart attack, is one of the major causes of death, especially in a country like India, due to our sedentary lifestyle and diet. It is crucial to take immediate action to identify a cardiovascular disease and rush the patient to the hospital. But the main challenge lies in recognising the symptoms of the ailment. Lack of handy devices at home or even with the nearest doctors at their clinics, leads to the loss of precious time, and in turn, unfortunate consequences. To overcome this major shortcoming, Anuj Sharma, founder and lead scientist of Anusandhan Technologies, has designed and developed a portable electrocardiography (ECG) monitor and analyser called CardioMon.

The origins of CardioMon
Sharma dreamed up CardioMon during his master’s degree. Myocardial infarction has seemingly unconnected symptoms, like back pain, shoulder and arm ache, acidity and so on, which people often do not recognise as the warning signs of an oncoming heart attack. Ideally, the victim should be in the hospital within an hour (called the Golden Hour) to reverse the effects of the condition. But the lack of awareness and the absence of portable ECG monitors or diagnostic devices result in delayed action.

Sharma recalls, “One of my relatives was experiencing symptoms of a heart attack and was about to board a train. Since there was no device to detect it, he had to be rushed to the hospital just in the nick of time before the problem grew serious. Experiencing this problem first hand, I decided to use my expertise in electronics and embedded systems to see if we could find a solution.”

While working on the project, he observed that most general physicians, who are the first to

be contacted by patients, do not have an ECG machine at their clinics nor do they carry them during their home visits. This is due to the high cost and bulky nature of the existing ECG machines in the market. As a result, they have to send patients to hospitals to get the ECG test done. Critical time is lost in this way, apart from causing more stress to the patient under these circumstances – all at a time when preliminary medication ought to have been prescribed.

Sharma took on this challenge as a personal research project to use digital signal processing (DSP) techniques to detect myocardial infarction. He says, “After four years of research, iterative design and development, we gradually succeeded with our prototype. I redefined the design, ensured the accuracy and shaped it into a complete product called CardioMon.”
The device can be purchased by medical institutions, doctors, paramedics as well as end consumers. With CardioMon, a real-time echocardiogram (ECG) can be displayed and being Bluetooth enabled, the results can be recorded on a portable 7.62cm Bluetooth printer.

The CardioMon device (ECG monitor and analyser) has an inbuilt 320×240 pixel TFT colour LCD display to view the results. The input is drawn through 10 electrodes – four clamp 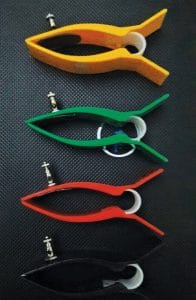 electrodes to be connected to four limbs, and six bulb electrodes to be placed on the chest at specific positions. An ECG cable is provided in the box to connect the electrodes to the CardioMon device. The electrodes can be placed directly on the body or can be used with an ECG gel to improve contact. Like any standard 12-lead ECG device, it can provide 12 ECG waveforms. Based on these signals, the devised algorithm provides a preliminary indication in case of myocardial infarction.

Testing the accuracy of the device and its myocardial infarction detection algorithm was a key part of the design life cycle. An ECG simulator was used to perform the testing. “The ECG signal is in millivolts – so accuracy is extremely important at this level of granularity,” says Sharma.

Sharma also developed an exclusive vest for the device to allow end consumers to take accurate ECGs easily. “The electrodes have to be placed in very specific positions to get the right results. While that is easy for doctors and paramedics, patients are mostly not aware. To address this, we have designed a vest that, once configured, will position the electrodes by itself,” he says.

Technical and ecosystem obstacles
Research-based innovation involves time and effort, apart from there being no guarantee of assured success. Sharma believes that this is when the Indian ecosystem becomes restricted. As a result, receiving funding also becomes very difficult. “Even for this research project, funding was denied, because people believed that a project driven by a single person seemed far-fetched. Finally, I had to bootstrap my project. The main concern is the hesitation of investors in taking the risk of investing and waiting for the fruits of research. It is a chicken and egg story. Someone needs to take the initiative and persevere, else we would never have had the innovations that we use so routinely today,” he says.

Familiarising himself with biomedical electronics, Sharma worked hard on miniaturising the product’s design based on the functionality and accuracy of the full-size ECG machines. He recalls that the first prototype was bulky and heavy.

Controlling cost was important too. “Initially, we had decided to restrict our cost per unit to ` 10,000. While my experience in electronics and hardware choices helped me reduce the cost substantially, the initial price target has not been met yet,” he says.

The complete CardioMon set is available for ₹ 15,000 (GST is extra) at Amazon.in as well as through some offline distribution channels. In the box is the main CardioMon ECG monitor and analyser device, 10 electrodes and an ECG cable.

Feedback and improvements
The Anusandhan team has been working with doctors in and around Pune with this device. Improvements are being made based on feedback. “Dr Pramod Narkhede of N. M. Wadia Institute of Cardiology has been a major contributor to the product’s life cycle. He has been

practically testing CardioMon for the last eight months and has given us considerable key inputs towards improving user-friendliness and the usefulness of the product.” The addition of accessories such as the vest and the printing feature was also driven by feedback from the doctors who were trying out the device.

The road ahead
Anusandhan Technologies plans to scale up production, based on the market performance of CardioMon. The team is in the process of expanding its distribution channels through partners who have the right technical know-how and experience in these types of biomedical devices.
As an upgrade, the team is ready to add the feature of providing results that can be sent to doctors via a smartphone for their viewing, apart from storing records in order to monitor the patient’s progress. Bluetooth compatibility with desktops and laptops is also being looked into. The team has also filed for a patent for the vest. On the road ahead, the team plans to keep creating proprietary products, as well as products for other companies based on research and innovation. 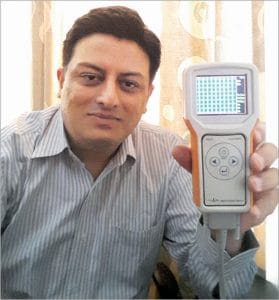 “India has so long been a service provider to the world. The culture of innovation and research has been clearly non-existent, even though we have some of the best minds and are ready to work hard. Somehow, we have always found it safe to repeat someone else’s success. Lack of support compounded with the fear of failure discourages us from taking the bold steps towards innovation,” Sharma states, candidly.

“But today, it is good to see the rising number of innovators in India. However, the path to success is long. It should be kept in mind that the necessity of a safe income should not end up in innovation taking a backseat,” he adds.

“On the sidelines of the ‘Make in India’ initiative, the time has come to have a similar movement called ‘Innovate in India’ to relieve us from our dependence on other nations for our consumer and defence needs,” concludes Sharma.

Use the right ESD and cleanroom products for your electronics