Tesla was one of the first electric vehicle companies to introduce Silicon Carbide (SiC) in one of its EV models. SiC, since then, has been creating a lot of buzz in the EV and hybrid electric vehicle (HEV) market. Now, a report by Yole Developpement notes that the SiC module market is expected to reach 32 per cent of the total EV/HEV semiconductor market by 2026

Battery electric vehicle (BEV) segment, as per the report, stands out as the winner in terms of SiC adoption. This is majorly due to the requirements of a long driving range and fast charging time. But the report also sheds light on the fact that SiC may not be a suit for all types of converters used in EVs. 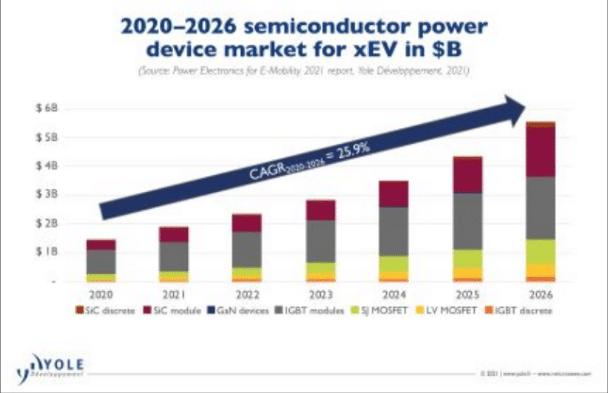 Value of SiC gets repaid

Explaining that the increased cost of a converter, due to adoption of expensive SiC, is repaid over long usage due to the increased efficiency of the converter, Yolo Developpement states that the use of SiC in the main inverter has become a common goal for the leading OEMs. The companies including Daimler and Hyundai have already noted that they will include SiC in main inverters.

Some of the benefits of SiC, over Silicon, include ten times the breakdown field strength and three times the thermal conductivity. This simply means that it can operate at higher temperatures of up to 200°C. Additionally Silicon has a breakdown voltage of around 600V, while SiC can withstand voltages five to ten times higher than that. To top it all, SiC can handle the same load design requirements at a much smaller size. Hence, it carries the ability to increase the efficiency of an entire inverter system by approximately 80 per cent.

“There are basically three converter types in an electric car: the main inverter, DC/DC and OBC. The main inverter is the largest market among the different converters due to the higher power levels, leading also to the highest content of power semiconductors,” asserts Ana Villamor, Technology & Market Analyst, Power Electronics at Yole Développement (Yole).

Now, while the main inverter market is expected to reach $19.5 billion by 2026, representing 67 per cent of the total EV/HEV converter market, with a CAGR of 26.9 per cent, it is important to note here that the value of power semiconductor market, is expected to triple between 2020 to 2026. The main reason behind the growth in the power semiconductor market is a major technology battle between IGBT and SiC modules.

It is worth mentioning here that SiC modules are presently still about thrice the cost of a 650V IGBT module, but this difference, as per the report, will shrink when larger volumes are produced, with the transition to 8-inch wafers, and with the penetration of 1,200V devices for higher battery voltages. The market value for semiconductor power electronic devices for xEVs will reach US$5.6 billion in 2026 with a CAGR of 25.7 per cent

“Today, there is already a good portfolio of SiC devices with SiC dies coming from Infineon Technologies, Cree (Wolfspeed), and STMicroelectronics. Many semiconductor players are targeting SiC modules for EV applications, and the SiC module market is expected to reach 32 per cent of the total EV/HEV semiconductor market by 2026,” reads the report.

The competition between the existing OEMs and new OEMs, in the space of EVs, is increasing as the technology is enabling newer models of cars to offer better performance/cost ratio. Wuling Hong Guang Mini EV, as a proof of the same, has become the global highest selling EV for the months of January and February 2021, by beating Tesla Model 3.