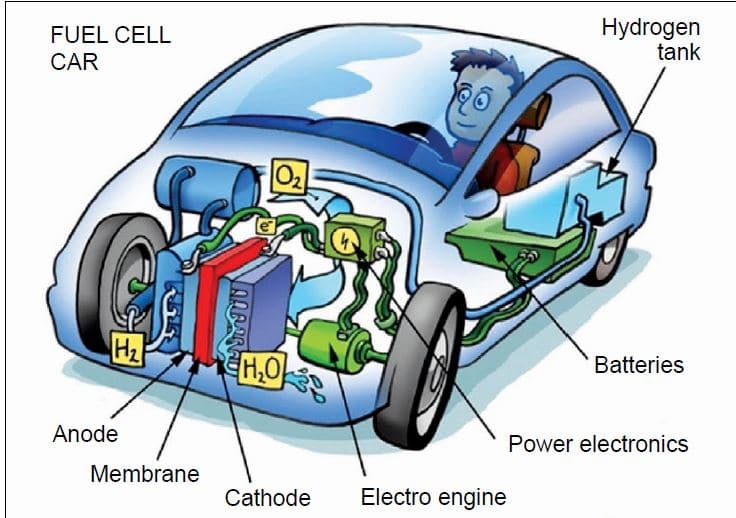 As an even greener alternative to electric vehicles, hydrogen powered vehicles could be the answer to the world’s air pollution problems. This article examines the pros and cons of this option.

Hydrogen has been used as a source of clean energy since decades now, from spacecraft and submarines to refineries and forklifts. When vehicles are powered by hydrogen fuel cells, the only byproduct is water, which is emitted in the form of pure vapour minus any greenhouse gas emissions. In addition to its abundance in nature (water and atmospheric gas), hydrogen-powered vehicles are more reliable than a combustion engine since there are no moving parts and they require just chemical reactions to power them.

For zero net emissions, the process of generating hydrogen should also be green. Commonly used processes of separating hydrogen from other substances include steam reforming of methane, gasification and electrolysis. Biogas and organic materials like livestock waste give out hydrogen at extremely high temperatures. In the most popular process, which is electrolysis, electric current is passed through water to separate its primary constituents—hydrogen and oxygen. Hydrogen is also a byproduct of many industrial processes where it is often treated as waste.

Hydrogen binds to most other substances and is a flammable gas. So, it is stored in liquid  form in a fuel tank for ease of transportation until it is needed by the fuel cell stack (collection of electrodes). The amount of energy stored depends on the size of the hydrogen fuel tank. Besides, in gaseous form, the costs for compression, cooling, transport and storage differ. Other key components of a hydrogen vehicle include electric traction motor(s), the thermal system, auxiliary battery and traction battery pack, among others.

Manufacturers define the power of a vehicle based on the size of the electric motor(s). Since the hydrogen engines are powered by an electric motor that is capable of high torque even at low speeds, these vehicles produce no engine noise and are also known as fuel cell electric vehicles (FCEVs). Most FCEVs use batteries for electrical energy converted from recaptured braking energy to provide extra power during periods of short acceleration.

Power is generated when the hydrogen inside fuel cells in vehicles undergoes reverse  electrolysis. In this process, the hydrogen in the tank reacts with the oxygen in the air to  produce electrical energy, water and heat. The electricity thus produced can either directly  flow to the electric motor, which in turn is converted to mechanical energy to drive the vehicle’s wheels; or the energy can be stored in the battery pack, depending on the  requirement. There is an auxiliary battery to start the vehicle. A thermal system keeps the operating temperature range in check. The fuel cell can be turned off when the need for power is low.

Unlike battery electric vehicles (BEVs) that require recharging from an external source, FCEVs produce electricity themselves and use only a small, lightweight battery for storage. The main advantages of this propulsion technology include a quick charging time of less than five minutes and a longer range compared to fully electric vehicles (for an equivalent battery size, regardless of environmental conditions).

In the Asian market, companies like Hyundai and Toyota have already come up with hydrogen powered cars – the Hyundai NEXO and Toyota Mirai, respectively. Even worldwide, manufacturers like Audi and BMW are working on hydrogen vehicles. Currently, fuel cell  electric buses (FCEBs) are one of the most widely adopted fuel cell applications. In May 2019, Transport for London ordered 20 hydrogen fuel cell double-decker buses. In a move  that’s the first of its kind in the country, undertaken with the support of the Ministry of New and Renewable Energy, Indian PSU NTPC recently invited global expression of interest (EoI) to provide ten hydrogen FCEBs as well as ten hydrogen fuel cell based electric cars for use in Leh and Delhi.

Startups like Germany based CleverShuttle provide FCEVs and BEVs for eco-friendly transportation. “Society’s transition from its reliance on fossil fuels to an electrified future
powered by hydrogen is building momentum. CleverShuttle is at the forefront of this shift. Fuel cell electric vehicles have been an important pillar for us. They have allowed us to provide countless passengers with comfortable rides, emitting nothing but water vapour,” says Fabio Adlassnigg, senior manager PR and public affairs, CleverShuttle.

While some experts anticipate a lot from this alternative, others remain sceptical. Hydrogen-powered vehicles require high pressure compression to work, which is difficult to achieve due to the low density of hydrogen. Also, there are a limited number of refuelling stations  currently (just in a few countries like Germany and the US) due to the lack of a wider manufacturing base and demand. The low demand for hydrogen vehicles stems from the fact that they are quite expensive to buy as well as use—almost double the cost of running electric or hybrid vehicles. And the overall efficiency is almost half of that of a BEV due to losses in hydrogen production through electrolysis.

New techniques can help in alleviating risks regarding the safety of such vehicles. For instance, researchers at Northwestern University in the US, in collaboration with the Colorado School of Mines and the National Institute for Standards and Technology, have recently come up with novel adsorbent materials that were built from organic molecules and metal ions or clusters, which can store hydrogen at much lower pressures.

The transportation and storage of hydrogen are more complex than conventional fuels. It is crucial to develop advanced infrastructure to refuel these vehicles, shorten transportation distances, and formulate policies for their production, in order to increase their adoption. Also, the use of platinum as a catalyst not only increases the cost but also causes issues like the emission of sulphur oxide. But with continued advancements in fuel cell technology, the use of platinum is slowly decreasing and is hoped to be lower than that in conventional catalytic convertors.

China, Europe and Japan are focusing on developing fuel cell technology, supply chains, and infrastructure on several fronts. In the US, the California Energy Commission (CEC) and the state’s Air Resources Board provide subsidies to new hydrogen car buyers. The California Fuel Cell Partnership has outlined targets for 1,000 hydrogen refuelling stations and 1 million  FCEVs by 2030. South Korea plans to expand the country’s hydrogen refuelling infrastructure to 660 pumps by 2030. Completely switching to such clean energies will go a long way in keeping the air clean and ensuring sustainable mobility.