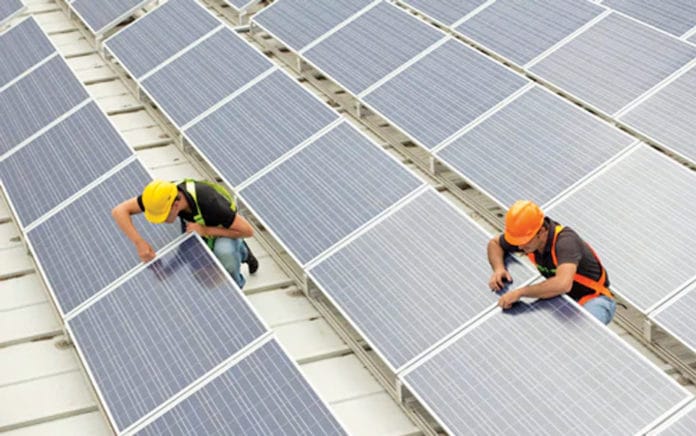 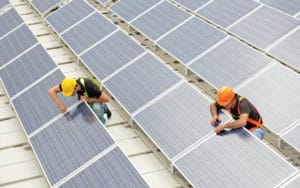 The essence of collaborative networking is that smart homes communicate with each other to create a community, as opposed to each smart home communicating independently with the public utility. Solar aggregators and other suppliers of local power manage the community’s energy resources. This scenario opens up a wide range of design opportunities in electronics.

The distributed intelligence that has been the defining characteristic of the smart grid can do more than enable smart homes and help utilities distribute power more efficiently. These two well-known advantages will be enhanced by two revolutionary changes at the edge of the power grid.

The first change is that the large fossil-fuel generating stations that public utilities use to pump out energy to the grid will be challenged by smaller power-generation networks —mostly solar, initially—that leverage collaborative energy exchange.

It is likely that the centre of these collaborative networks will be solar power aggregators such as Sunrun Corp., Solar City and the aptly named SunEdison—three of the larger companies involved in home solar power installation, financing and leasing. Leaders in smart meter technology such as Itron Corp. will also be key players.

Aggregating solar energy requires intelligence at every level, including smart meters, but it also has to include solar inverters upping their game so that they assist in the critical task of estimating how much power can be generated at any given moment and what to do with it.
The second change will be to accommodate and exploit the emergence of electric vehicles. As more electric cars get bought, one natural consequence will be more 240V charging stations in homes, which will radically change the load profile of the average residential customer. Charging electric vehicles may also stress the capacity of existing power distribution systems. Under the right circumstances, however, car batteries may also be used as a local energy resource. Vehicle-to-home adapters can be designed to discharge their energy to power a home during a brownout.

Potentially, any local entity with internal energy production capabilities, like a business or business park, factory, university, or hospital, could participate. Information will be transmitted not only over the utility’s power grid but also using social media and, importantly, the Internet of Things (IoT).

This scenario opens up a wide range of design opportunities in electronics, which include energy monitoring at a more granular level and, at the other end of the business model, handling the financial and business aspects of small-scale energy exchange.

It’s important for energy consumers and energy producers to measure and understand the bi-directional flow of both energy and information. Financial transactions such as taking advantage of credits and incentives for clean energy generation, behaviour modification and carbon emission reduction will rely heavily on measurement and collaboration among multiple stakeholders.

In a collaborative network, utilities will not only be able to identify customers with solar panels but also which of those customers qualify as having a ‘smart home’. For their part, consumers will know more about incentives the utility might be offering and how they can benefit by using home automation software. At the local level, energy services companies will be better able to control generation in the aggregate so they can participate proactively in energy markets for grid stability services. Cost savings derived from collaboration could be passed on to consumers in the form of more attractive financing for solar panel installation.

Cooperative power management
Highly accurate measurements of bi-directional energy flow and voltage monitoring will be required for energy-producing equipment such as solar inverters and batteries/energy storage systems because they will now be directly involved in market transactions. The sensors and processors in these products must deliver high quality, but still be relatively inexpensive.

On the other hand, the role played by equipment such as load control switches, thermostats, pumps, water heaters, and smart appliances will be to help collaborators understand the cyclic behaviour of their equipment and provide estimates of energy consumption over time, such as with HVAC systems. These products can work successfully with sensors that don’t require revenue-grade measurement.

Solar panels are the linchpin of collaborative networks because they provide the basic commodity: energy. Photovoltaic conversion has come a long way in the past decade but using it as the primary power source for a community makes reliability and predictability essential. Solar energy efficiency depends on many variables including the amount of sunshine available for harvesting, the temperature of the solar panels, and their theoretical peak efficiency. For design engineers, another problem is that photovoltaic cells produce voltages that vary erratically around a half volt. This has many implications, such as when choosing a power conversion topology. It is possible, for example, for a poorly implemented power conversion technology to consume a high percentage of the harvested photovoltaic power.

To accommodate the inconvenient fact that the sun does not shine 24 hours a day, batteries are required for delivering power when the panels are not producing enough energy. Adding batteries to the system makes DC-DC conversion circuits a necessity. Battery management and monitoring circuits are also required so that the batteries can be charged efficiently.

In both collaborative and traditional power distribution networks, solar systems interface with the power grid, which requires phase synchronisation and power factor correction. There are also several use cases that require sophisticated control. For example, fault projection must be built in, to guard against events such as brownouts and blackouts.

Micro inverters
Typically, solar panels installed in a residential setting have a single power inverter, which basically handles the conversion of unregulated DC power from all the solar panels in the system, to high-quality AC power that can be used by the consumer. The most significant downside of a single-inverter power conversion topology is the reliability issue: if the inverter malfunctions, the energy being generated by all the panels is lost until the inverter is fixed or replaced. Single-inverter topologies also are limited in efficiency because each panel has different operating characteristics that are ‘averaged out’ during conversion.

Another important benefit is the ability to adjust conversion parameters on each panel to accommodate the amount of sunlight, shade, rain, and other variables. In order to handle this task, micro inverters typically execute sophisticated algorithms known as maximum power point transition (MPPT) algorithms. This computational requirement can add another feature to the MCU —a DSP core. At the panel level, a 30 per cent increase in efficiency is easily attainable.

Collaborative networks obviously require communication between panels to keep loads in balance, and allow advance planning for how much power will be available, and what to do with it. Since each subsystem will be part of the IoT, the first communication requirement is the use of Internet protocols.

To simplify interfacing with other micro inverters, the MCU should also integrate on-chip communications peripherals such as CAN, SPI, and UARTs. Supporting power line communications protocols is another important option because it would eliminate some of the wires dedicated to communication. But this requires a high-performance PWM capability to be built into the MCU.

Smarter homes and smarter grids
Collaborative power networks based on sharing solar generation with a traditional utility grid for support also have many characteristics of the smart grid. Internet-enabled appliances and other products as small as light bulbs feed their information into a home area network (HAN) using ZigBee, Bluetooth, Wi-Fi or some other wireless protocol. A gateway transports the aggregated information though a smart meter and into the solar aggregator, which has now taken the place, at least in part, of the public utility.

Advanced energy applications leverage this data into actionable events. Metering data is stored in a variety of data formats so it can be used by multiple communications interfaces. For the consumer, downloadable apps are being developed to extract value from local metering data. Calculating baseline consumption locally in a device provides consumers and utilities with indications of typical usage, and the chance to reduce load during demand-response events. Similarly, rate calculation code can estimate the cost of battery charging—including electric vehicles—or for energy conservation. All this helps consumers select the best choice of tariff given their energy-consumption behaviour.

In summary, collaborative power networks that combine energy utilisation, generation and storage by end consumers are a new spin on the smart grid. Collaborative networks require accurate measurement and communications, however, which means that intelligence and control must be extended to multiple parties in order to create mutual value.

The author is a former chief editor of two major publications for electronics engineers and is a successful freelance writer specialising in communications, semiconductors, wireless and EDA. He has logged more than 25 years writing, editing and managing websites for technology companies. A graduate electrical engineer, he lives and works in San Francisco.