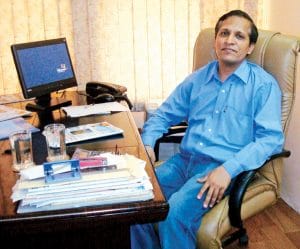 Venturing into the field of business rather than restricting himself to office jobs is what helped Yogesh Dua, MD, UTL, come a long way. Currently, his firm has gained a strong foothold in the electronics industry. In a candid conversation with Sudeshna Das, senior executive editor and Baishakhi Dutta, business journalist of Electronics Bazaar, he shares his amazing 20-year journey as an entrepreneur.

Childhood
I am from Hisar, Haryana. My father passed away when I was just seven years old. Since then, I knew that I had to do something big. During my childhood, we stayed in a small house and both my parents used to work. In government service, when a person passes away, any one person from the family gets that job. The same happened with us, and my elder sister took up my father’s job after he passed on, since I wanted to do something else. Eventually, after I completed my engineering, I decided to start my own business venture.

Family
My mother supported me a lot. She took on the responsibility of raising the four of us all by herself after our father’s demise. Teaching us, sending us to school and college, bringing all of us to a certain level, —everything was on her shoulders alone. My younger brother is an IIT engineer and is in the USA now. He has also inspired me a lot. At times, he asks me certain questions that directly or indirectly enhance my knowledge and vastly help in my personal improvement.
Before my brother got through to IIT, he got into the REC (Regional Engineering College, now renamed‘NIT’or National Institute of Technology) the previous year, which is government aided. He refused to take admission in the REC, however, since his goal was to study in one of the IITs. So he chose to drop a year and appear for the IIT entrance exam again the next year. He cracked the exam that year, making us all very proud of him. Later on, many said that I had inspired him since I taught him to a certain extent (math, in particular) during his eleventh and twelfth standards. I don’t know if I am a good teacher of academics, but I have definitely tried to teach and imbibe in him the morals of life and the basic principles of living.
My wife is a homemaker and is the backbone of our home. I have two daughters. Both are studying in school currently.

How the UTL journey began
Since the beginning, I chose to be involved in a business venture rather than a job, because I believe a business gives you freedom in many areas whereas jobs restrict you. When you are employed, there is a particular level beyond which you cannot explore things. But when you are doing business, you are your own master, so you can venture up to any heights, according to your wishes. Business opens up multiple avenues to explore and experience. My decision to do business has allowed me to achieve what I have, today.

Why electronics?
My partner, Praveen, and I started this business jointly. We both did a course together in electronics and decided to do something in this domain itself. We wanted to do some research based work, invent something new and sell that. We started off with car locking systems, which did work, but not for too long. We also lacked the resources to try out something new. Consequently, a lot of our efforts were in vain. Finally, in 1996, we stepped into the inverter industry and excelled in it. Since then, we have not looked back.

The qualities I look for in a person
What attracts me is a person’s ability to communicate well. I appreciate polite speakers who keep their ego suppressed and express themselves with humility. Although I myself maintain an egoistic image, which I believe is necessary to get a confidence boost to do well in this competitive market, this trait can also drive people away.

Why manufacturing?
From the very beginning, I was hooked onto the idea of only selling products that I had made myself. My partner and I aimed to achieve this by putting my engineering knowledge to good use. Selling what others make does not add value to your work; neither does it do justice to your academic degree. Thus, we decided to take up manufacturing.

Preferable work culture
I first try to assess how much people are in need of the job, then how much they are willing to do for the job, and third and most important, how willing they are to learn something new. A person who has the zeal to learn something new will definitely turn out to be far more productive than one who does a job motivated by compulsion. The professional attitude of a person is also very important. I also assess whether an employee will be able to adapt to our culture in the long run. Any sort of negative environment in the office premises is strictly dealt with.

Motivating my employees
We have hired professional motivators here who take sessions on a daily basis. I communicate with my employees, convey to them the requirements and take updates from them, from time to time.

The journey so far
We started off in a very small way. My partner and I set foot in Delhi to kick off our business plans. We started from one small room (in the Trans-Yamuna region) with just a small kitchen. That small room was also our own laboratory. We stayed there for four to five months. That was a very basic arrangement and things were difficult then. We used to go to the markets, buy components, and attempt to build something new—and we failed repeatedly. We faced hard times and frustrations as well. But slowly, we started to get a strong foothold in the business and, over the past 20 years, we have cemented our position in the industry. We have over 500 employees now.
Our first customer was a friend’s relative. He advanced us some money to make an inverter for residential purposes. Moving from residential inverters to industrial inverters was not part of a plan. We went with the flow, and the market’s demands and needs. We executed orders according to the demand. We entered solar inverter manufacturing about six years back. We never planned which areas our business would enter but rather, depended on the market’s growth. We wanted to venture out and try everything and that is how we have kept the business growing over the last 18 years. It’s only in the past two years that we have started working with a plan. Hence, our growth has been comparatively better and we are growing faster now. So you can say that, initially, our technical learning and experience was put to use but our business knowledge was not in place. Now we have started strategising our business, sales and growth. This change has been brought about on the advice of a business guru. Earlier, we used to focus on our profits. But now we have started focusing on our overall turnover. Higher turnover leads to an increase in the number of employees, new financial policies and, most importantly, the value of the company increases.

Five years down the line
I keep thinking about my company all the time. Although I get little personal time, I use it to watch movies to relax. We have set ourselves a target of 60-100 per cent growth. Once my company achieves that, then I can say we have achieved what we set out to do, long ago.

My message to budding entrepreneurs
At this point in time, moving ahead in this market is very difficult. It is comparatively easier for those who have already established themselves to survive and fight the tough competition, since they already have invested in proper infrastructure. But those who are completely new have a very challenging task to make their presence felt in the market. This is one domain where prices fall, but expenses (like manufacturing costs, labour, etc) increase every year. There is a lot of international competition also. In the last four to five years, many small industries in this sector have shut down. So entrepreneurs should enter this field only if they can rise to the challenge of the high level of competition they will face here.