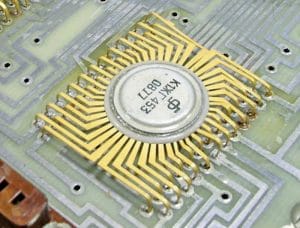 Many of the defence electronics systems, cards and modules currently being used in India were procured during the Soviet era. The defence organisations that procured these systems usually turn to industry, in general, and MSMEs in particular for help in the repair, maintenance or indigenisation of such systems. However, typically, organisations in the Indian electronics industry shy away from such activities as they consider them complicated—they have little knowledge of such old electronics–particularly systems with vacuum tubes. Today, industry is generally not aware as to how to acquire the knowledge to take on the indigenisation of cards and modules of the Soviet era.

What is the Soviet era system?
Electronics dating from the Soviet era (pre-December 1991) is primarily simple, and based on discrete components. It uses very few integrated circuits, and vacuum tubes are widely found in many of the cards and modules with a wide range of functions. It is not very difficult to decipher the functioning of the PCBs as they are not multi-layered, and all tracks are easily visible and manually traceable. But the main problem faced by engineers during indigenisation is the availability of components and finding their current equivalents. This is the primary reason that there are only a few takers from the industry for the job. However, there are enough resources on the Internet and in books, which can help surmount this problem almost every time. A little knowledge of Russian will go a long way in understanding the text in the resources available online and elsewhere. Fluency in Russian is not necessary, yet knowledge of the Cyrillic script and of a few key words related to electronics is sufficient to understand the datasheets of electronic components.

Resources available on the Internet
It is surprising that a large amount of information about obsolete Soviet components is freely available on the Internet. The primary reason is that Russian industry continues to maintain a large inventory of legacy systems, which is why it is still sharing its knowledge on the Internet. There are quite a few hobbyists who are maintaining their websites and blogs with information about legacy systems and components. Of course, these are all written in the Russian language.
The best way to be able to communicate online in Russian is to use Google Input Tools. This comes with an onscreen Russian keyboard, and it is possible to install it on a Windows PC and use it conveniently. Another important tool you could use often is the online translation service offered by Google. Some of the documents available on the Internet are scanned copies of very old books and specs sheets, for which OCR (optical character recognition) will have to be run to make their text available for further translation or in order to search the document. Acrobat Professional has the OCR capability in the Russian language. Some of the files available online are in DjVu format and not in PDF. To read them, djvu.com and djvu.org have enough resources that can be downloaded. Most of DjVu files are also scanned text and are not searchable, but in order to run OCR on them, convert them to PDF format. This can be done with free programs like doPDF. In short, the programs that one needs on one’s computer are Google Input Tools with Russian language, DjVu, Acrobat Professional and doPDF.
Russian letters are shown in the cheat sheet. It is important to note that some of the letters are common with the English script, but have a different pronunciation; for example, ‘P’ in Russian is equivalent to ‘R’ in English.

Electronic components
It is important to understand the Soviet electronics industry of the 1950s and 60s in order to fully appreciate the peculiarities of components from that era. As per a declassified CIA report, the state controlled electronics industry grew rapidly into a 9 billion ruble industry in the mid-fifties, with over 70 per cent of the production going towards military applications. The industry evolved behind the ‘iron curtain’ and, technically, the components and sub-systems were different from those used in the West. Due to these factors, there will always be a problem in finding an ‘equivalent’ of the component used in a Soviet era system. In most cases, the detailed specifications sheets of the component have to be studied, and the closest match (based on the application in the circuit) selected.
With a Russian language guide and information on the‘Russification’of the PC, it is easy to access the relevant information. There are also quite a few downloadable scanned books available that are helpful. These books are called ‘Справочник (Spravochnik)’ or a directory/handbook of electronic components. Some of these books are published for specific applications like communications while most of them are generic in nature. An important text that everyone who needs to work with Russian electronics should have is‘ГОСТ 15133-77 (GOST 15133-77)’. This is a published GOST standard containing a list of Russian semiconductor devices’ names and their equivalents in English, German and French. Many of these books also list equivalents of the devices, which are termed as ‘Зарубежные аналог (Zarubezhnyye Analog)’ or ‘foreign equivalent’.

Second element. The second element defines the class of the semiconductor device. Some of the important classes are shown below:

Third element. The third element defines the sub-class and working ranges for different classes. For example, ‘1’ for the rectifying diode means that the rated current is less than 0.3A, and ‘2’ for the transistor means a low power transistor with peak power less than 0.3W and with an operating frequency less than 3MHz. The complete list can be found in the GOST standards and in the various directories of electronic components mentioned earlier.

The fourth to sixth elements represent the development serial number of the device in its class and sub-class, and certain parameters in case of zener diodes. The last digit after the hyphen, if given, shows the modification information—for instance, ‘9’ means an SMD. In case of small devices, there are also colour coding schemes standardised by GOST.

Vacuum tubes
Vacuum tubes or valves can be found in many legacy systems of the Soviet era. Surprisingly, they are still functional, and some of them are still available in the Russian and other international markets. One can search for their names in the Russian language and find websites with their details, and sometimes even sites that are selling them online! But, be aware that they only ship to a Russian address. The most common types of vacuum tubes are triodes, double triodes and pentodes. Similar to the naming convention of semiconductor devices, there is an elaborate naming convention used for vacuum tubes as well, based on the ГОСТ 5461-59 and ГОСТ 13393-76 standards. In the case of vacuum tubes, apart from understanding their names and specifications, it is difficult to ascertain their functionality, since they look very similar to each other—unlike semiconductor devices. A brief on the naming convention is given below.
First element. The first element specifies the filament voltage rounded off to the nearest whole number. The most commonly occurring numbers are 1 and 6, for 1.2V and 6.3V, respectively.
Second element. The second element specifies the type of the device. Some of the most common occurrences are:

Fifth element. The fifth element is optional. It is followed by a hyphen ( – ). It represents the variant of the main class of a vacuum tube. As an example, Д (D) stands for exceptionally long service life and И(I) stands for pulsed usage.
There is a different convention for very high power transmitter vacuum tubes as given below.
The first element is always Г (G). The second element represents the frequency band and also the mode of functioning.

The third element is the serial number of the tube. The fourth element after a hyphen (-) shows the cooling method. ‘A’ is for air-cooled and Б (B) for water-cooled.
Moving forward
Till now, I’ve primarily covered diodes, transistors and vacuum tubes. Resistors and capacitors can easily be understood, and their numbering and marking systems are similar. Besides, in the case of unreadable markings, their values can easily be measured. ICs are a different subject altogether, and each class needs to be dealt with separately. They have not been covered here because of paucity of space and also because this article is more of a primer than a comprehensive guide. Information on most of the Soviet era ICs is available online, and can be searched using the methods described earlier. Information on transformers can also be found on the Internet using the part numbers mentioned on them.
With the information provided here, it is easy for an electronics engineer to help repair or indigenise a system of Soviet origin. With a little knowledge of the Russian language, it is easy to find the relevant information on the Internet.

Some useful handbooks and references