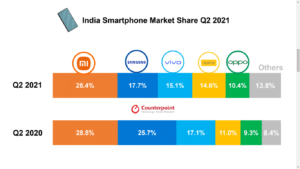 India’s smartphone shipments witnessed an 82 per cent year-on-year (YoY) growth to reach over 33 million units in the second quarter of 2021, according to the research firm Counterpoint.

However, the market declined 14 per cent sequentially due to a fall in consumer sentiment during the second COVID-19 wave. But the decline was less than expected due to the resilient nature of the smartphone market, the research firm’s report added.

Senior Research Analyst Prachir Singh said, “The market saw a pent-up demand in June as restrictions were lifted and stores started to reopen. Offline-centric brands were more affected during April and May as consumers were preferring online channels for purchases.”

Xiaomi continued to reign the Indian smartphone market with a 28 per cent share. South Korean giant Samsung held the position of the second-largest brand in India’s smartphone shipments, registering 25 per cent YoY growth.

“Samsung reached its highest-ever online share, an indication that the brand’s online channel strategy is working well along with its e-store,” the report said.

With 61 per cent YoY growth, Vivo stood at the third position while Chinese smartphone maker Realme grew 140 per cent YoY in Q2 2021 and captured the fourth position.