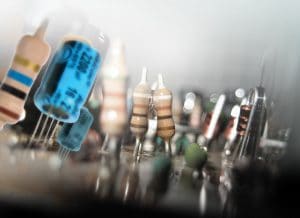 Over the next five years, accelerated local manufacturing of electronic products catering to growing domestic demand will drive the market for electronic components in India

The Indian market for electronic products is poised for significant growth in the next few years. According to an ASSOCHAM-Ernst & Young (E&Y) study, the Indian electronics and hardware industry is expected to grow at a CAGR of 13 to 16 per cent during 2013-18, and to reach US$ 112 to US$ 130 billion by 2018 from the previous year’s level of US$ 75 billion. This growth will be driven by rising local demand and growing disposable incomes.

Moreover, adoption of high-end technology devices, technology-driven transformation such as roll out of 4G/LTE networks and the Internet of Things (IoT), policy and incentive boosts from the government, government initiatives like Digital India, Smart Cities, wider broadband connectivity, e-governance programmes and so on are driving accelerated adoption of electronic products. Growth of the electronics products industry has started driving the expansion of the electronic components industry as well. Local brands under the Make in India initiative as well as global manufacturers looking to relocate their manufacturing base from China to alternate locations such as India, Vietnam and Indonesia due to mounting labour costs provide a strong impetus to the Indian electronics and hardware industry. This, in turn, presents an opportunity to the electronic components manufacturing industry of the country. Over the next five years, accelerated local manufacturing of electronic products catering to growing domestic demand will drive the market for electronic components in India.

Market mix
The electronic components market can be broadly bucketed under the following sub-categories:

In 2015, the total market revenue for electronic components was US$13.5 billion (Fig. 1). The market was dominated by electromechanical components, which accounted for 30 per cent of the total demand, followed by passive components with 27 per cent market share.

However, in recent times, active components and associated components have also witnessed significant growth. While the industry composition is not predicted to change substantially, there is a rapid decline in products such as cathode ray picture tubes and CDs/DVDs, which had till recently constituted a significant share of the manufacturing base and market. This is an outcome of advancing technology and consumer preferences.
According to an ELCINA study, electronic components produced in India include, among others, wound components such as transformers and coils, diodes, transistors, resistors, capacitors, switches, relays, connectors, magnetic heads and so on. Components such as picture tubes and magnetic tapes have become almost extinct due to changes in technology. India had a strong industry for these components and we have not been able to upgrade to new technologies such as LED/LCD and solid-state storage devices to keep our market share.

Nearly 70 per cent demand of electronic components (Fig. 2) is fulfilled through imports. Increasing reliance on imports for sourcing electronic components used in electronic products makes it crucial to enhance/strengthen India’s electronics manufacturing capabilities.
Countries that account for a major portion of India’s imports include China, Taiwan, South Korea, Japan and some European countries. Share of imports is higher for specialised and precision components like integrated circuits, chip components, printed circuits boards and light-emitting diodes.
For components that do not require sophistication, India has established near self-reliance. These components include cables, speakers, cathode ray tubes and so on. India has also been exporting these components to other countries (Table I). 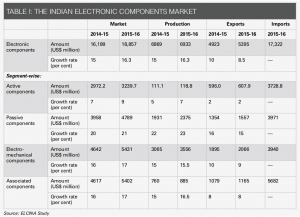 Market drivers
Consumer durables and telecommunication (including mobile devices) account for the major demand for electronic components in India. This is followed by information technology and office automation and automotive industries. Other application industries like industrial electronics, medical electronics, strategic electronics and lighting industry contribute to the balance of the market. Industries like lighting and strategic electronics are expected to witness substantial growth in the near future (Fig. 3).

Market trends
The electronics industry is going through an exciting phase with growth in demand and importance of electronics as well as revolutionary changes in technology, launch of innovative products and the challenge of global competition. This has necessitated the electronic product and component manufacturers to focus on continuous improvement in their products in order to stay ahead of the pack, resulting in the following trends: 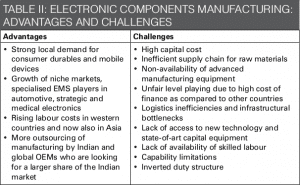 Miniaturisation. This refers to the creation of smaller-scale devices or components for mechanical, optical and electronic products. The dawn of convergence has led manufacturers to integrate multiple devices. At the same time, demand from consumers to reduce the size of products to make these easy to manage has led to these products becoming smaller in size or miniaturised.
Miniaturisation results in greater density of components that is usually possible through very-large-scale integration designs. This also enables lower cost of production, resulting in reduction in overall product pricing. Miniaturisation is expected to increase and impact the traditional component market as most of the traditional components will be replaced by chip components and integrated circuits.

Artificial intelligence. Consumers are becoming increasingly technology-conscious and are demanding products with built-in intelligence. This is resulting in electronics and consumer durable products being manufactured with intelligent functions and logic. For example, washing machines available now can sense the load and decide the appropriate washing cycles. Intelligence has moved beyond consumer products, and is also available in several medical and industrial electronics products with computer-numerical-control functions.

Moving forward
The Above changes in technology are expected to change the landscape for electronic components manufacturing. Apart from the above, manufacturers across the globe have started moving towards green electronics and sustainable development with the implementation of the Restriction of Hazardous Substances (RoHS) and Waste Electrical and Electronic Equipment (WEEE) regulations.
In line with this trend, the Indian government, too, has issued notifications to regulate the use of hazardous substances (like lead, cadmium and mercury) and proper disposal of WEEE. Similarly, rules have also been notified with respect to energy-efficiency norms and labelling of most consumer electronics and durables.
Traditional components will increasingly face stiff competition from passive chip components, integrated circuits and surface-mount technologies that will replace these in several electronic products. Therefore in the near future, it is important for component manufacturers to shift focus from discrete components manufacturing to integrated components manufacturing so as to be able to benefit from the changing landscape of the country.