Supercapacitors or ultracapacitors are charge storage devices that store electrical charges via electrochemical and electrostatic processes. These have an unusually high energy density as compared to common capacitors. Due to their beneficial properties like fast charging ability, superior low temperature performance, long service and cycle life, and reliability, supercapacitors hold the potential to replace or complement traditional batteries and capacitors in several applications. These are already being used worldwide in a number of applications ranging from automotive, renewable energy to electronics.

The current practice, across the globe, of upgrading to power generation from renewable resources to reduce rapid depletion of natural resources is also expected to drive the market for supercapacitors in the coming years.

As per IDTechEx report, the global supercapacitor market is expected to reach US$ 8.3 billion by 2025. The market is projected to grow at a compound annual growth rate (CAGR) of 30 per cent till 2025 (Fig. 1).

Consumer electronics and automotive will be the highest revenue-generating segments during this period. Although the supercapacitor market is at a nascent stage, ample emerging growth opportunities are available for the future. Highlighting features such as regenerative braking and easy application in hybrid electric vehicles (EVs) are making supercapacitors the best suited device in automotive applications. Increasing demand for renewable energy generation has been observed in countries across Europe, Asia and USA, which would further fuel the supercapacitor market growth.

Moreover, evolution of supercapacitors as a sustainable energy storage solution, growth of EVs market and increasing capacities of supercapacitors resulting in their applications in wind and solar power sectors is anticipated to boost their demand in India in the next five years.

According to ‘Supercapacitor Market Landscape Study’ prepared by Electronic Industries Association of India (ELCINA), an apex industry association supporting electronics and IT hardware manufacturing industry, by 2020, overall market opportunity for supercapacitors in India will be approximately 1.3 billion units, with major demand from consumer electronics, EVs, renewable energy, railway, defence and more, accounting for the minimum revenue opportunity of ₹ 13.203 billion and the maximum revenue opportunity of ₹ 39.606 billion. 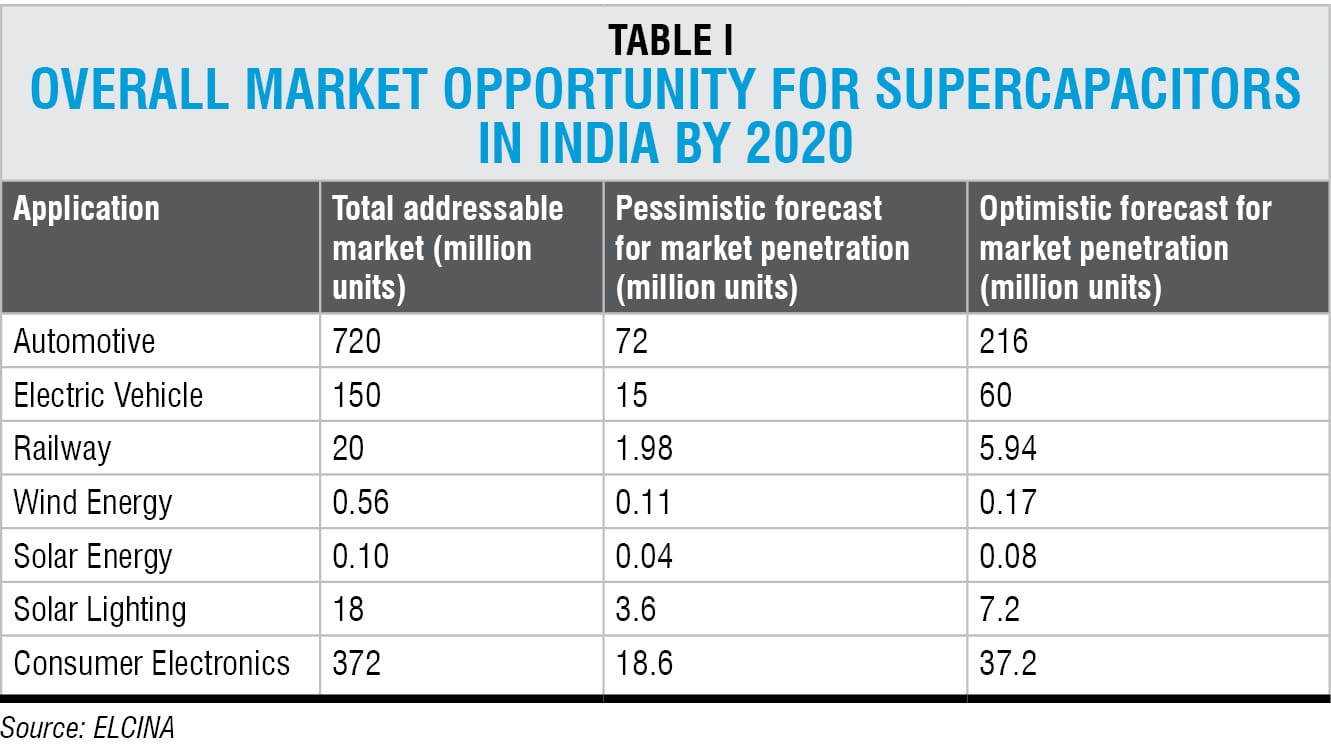 Supercapacitor technology has not yet been commercialised in the Indian market, and supercapacitors are not yet common in use. Only a handful of companies and research laboratories are working on their manufacturing. However, considering growing concerns of environmental issues, global warming, air pollution, green energy as well as government initiatives to make India a manufacturing hub, the Indian market is poised for an explosive demand for supercapacitors in various sectors due to their diverse applications in the following sectors.

The supercapacitor market growth is most likely to be driven by automotive applications such as regenerative braking, start-and-stop systems and powering of on-board electronic features. Companies like Tata Motors and KPIT Technologies are already exploring supercapacitors as an alternate energy storage option for EVs.

Given the high growth projected for EVs under National Electric Mobility Mission Plan (NEMMP) 2020 in India, supercapacitors stand a strong chance to be utilised in this sector. NEMMP 2020 envisages the penetration of five to seven million EVs on Indian roads by 2020.

Power recuperation and dynamic brake energy storage could be major applications. It is estimated that demand would reach around 10 million units of various supercapacitor modules in the next three years.

It is estimated that the wind power potential of India is to the tune of 1GW to 5GW. In wind turbines, supercapacitor-based electrical pitch control can provide the best solution. Globally, more than 14,000 installed turbines are already using supercapacitors. It is anticipated that by 2020, supercapacitor penetration will increase by 30 per cent, for which an estimated 0.17 million units of supercapacitors will be required.

Solar PV panels and solar lighting are potential areas where supercapacitors can find immediate use in India. Considering India’s solar mission in place, the solar energy sector could act as an entry point for supercapacitors in the Indian market. With the launch of Jawaharlal Nehru National Solar Mission (JNNSM) in 2010, India is poised for the solar energy sector to take off.

In general, solar panels are used in both modes, online as well as offline, for which supercapacitors are strong options. With a conservative forecast of 40 per cent penetration of supercapacitors by 2020, demand in this sector is estimated to touch around 416,000 units. Various government-supported programmes like SHS, MNRE’s solar lanterns and so on are estimated to create additional demand for supercapacitors, amounting to another 10 million units.

In India, since there are a limited number of consumer electronics manufacturers, opportunities for supercapacitors to be integrated directly into devices like cellphones and laptops is a bit difficult. A possible solution could be the power bank, wherein fast-charging and high-power-density features of supercapacitors can be well utilised.

High specific power and higher life cycles (up to millions of charge/discharge cycles), high efficiencies up to 98 per cent, quick charge/discharge and workability in extreme weather conditions make supercapacitors an efficient storage option for the defence sector. However, defence, being a conservative sector in nature, might not allow easy entry for any new technology.

The world’s population is expected to grow by two billion people by 2050, and global energy demand is expected to roughly double during the same period. Concurrently, the power sector is on the brink of a major transformation, like adoption and grid integration of solar and wind energy.

Unlike in the past, the grid must now accommodate producers and consumers with disparate usage patterns. Stability of the power grid depends on various actors working in tandem to maintain a balance between electricity supply and demand. Traditionally, electricity assets were categorised based on their function, that is, generation, transmission and distribution.

The smart grid concept has made inroads owing to the above-mentioned situation. There is demand for smart supercapacitor-based storage systems, which can balance supply and demand across segments that comprise the value chain. New control points offered by supercapacitor-based storage systems enable operators to selectively and instantly respond to fluctuations in grid inputs and outputs.

Such functionality is an essential requirement of the smart cities concept, where producers and consumers are equally informed and equipped to respond to market dynamics in real time.

The Indian government has released its first list of smart cities. In the coming years, supercapacitors will be in high demand in this sector for smart grid applications, smart utility energy meter applications and so on.

High costs and technical issues (like low energy density) are two key factors that are hindering growth optimisation. While researchers are exploring alternative supercapacitor electrode materials like graphene to address the issue with low energy density, mass production and wide application will bring down the costs further.

Potential manufacturers need support to make supercapacitors, right from ensuring successful adoption of technology. A wider indigenous manufacturing base for supercapacitors will help improve the scenario for new entrants.

A major manufacturing challenge is that supercapacitor technology is still in evolution mode, with a lot of improvements lined up.

Another challenge is unavailability of indigenous raw materials, with almost everything being imported, including aluminium foils, separators, carbon and electrolytes.

Supercapacitors are known for being environment-friendly and efficient; for their performance, reliability, fast-charging capabilities, virtually infinite charge/discharge life cycles, being maintenance-free; and for having a wide temperature range. All these properties pay in the long run, on the environment and economic fronts, besides leading to power savings, improving power quality and contributing towards national fuel security policies.

Though supercapacitor technology is in the R&D stage in India, opportunity for this technology is huge considering the various application sectors. To get the technology in mainstream and start mass production, Indian market needs to have some levers that will foster the adoption of the technology here.

As the initial steps to get the supercapacitor technology in mainstream and start mass production, India can look at the following solutions:

An immediate solution for supercapacitor manufacturers or designers would be to pair these with batteries, creating a hybrid energy storage solution.

Creating demand in the market

By offering subsidies, government-industry collaborations and purchase mandates, supercapacitor technology can be promoted.

By providing OEM incentives to promote local manufacturing and encouraging tech startups to work on advanced and emerging technologies like supercapacitor, enough interest can be generated among local manufacturers to accelerate indigenous production.

A complete supply chain is required to boost local manufacturing. This would also keep the end-product cost at the lower side, since India will not have to import raw materials or any other components.

To initiate commercialisation of supercapacitor technology, business models such as joint venture strategy, cross-industry consolidation and R&D outsourcing can be adopted. These business models have advantages such as faster time-to-market, risk transfer, knowledge sharing and access to expertise.