As the world stares at the ongoing semiconductor shortage that shows no sign of recovering, research firm Counterpoint Research has lowered its smartphone shipments growth forecast for the second half of 2021.

The semiconductor crisis, which first began following the onset of the COVID-19 pandemic in 2020, has since aggravated numerous industries starting from automobiles to PCs. Experts and industry veterans have made several remarks on how long the shortage is expected to last. 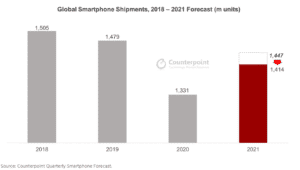 “The smartphone industry was set for a strong rebound this year after COVID-19 had hit the market hard in 2020. Smartphone vendors placed large component orders from the end of last year, and consumer demand coming from delayed replacement purchases buoyed the market in the first quarter,” said the report.

The report added that when the shortage first began, the smartphone industry had managed to grow despite shortages in components like DDIs and PMICs. This was done by advanced planning and order placing along with hoarding of certain components like Application Processors (AP) and camera sensors which are typically much higher value than DDIs or PMICs.

In the case of application processors, one of the most crucial elements in smartphones, the shortage was triggered by low yield rates in newly established fab lines. With the situation seeming to persist it caused a chain reaction throughout the industry.

Tom Kang, Research Director at Counterpoint Research commented, “the semiconductor shortage seems to affect all brands in the ecosystems. Samsung, Oppo, Xiaomi have all been affected and we are lowering our forecasts. But Apple seems to be the most resilient and least affected by the AP shortage situation”.