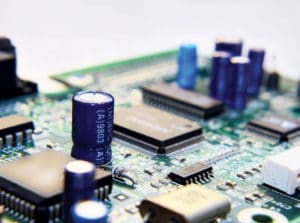 The Indian electronic component industry is facing several challenges in the supply chain system as the pandemic is showing no signs of abating and the negative sentiment against Chinese products continues to grow. The Indian government has given a clarion call for self-reliance in this critical scenario, but will need to work together with the industry to bring this about. If the opportunity is grabbed, it could give a great boost to the local electronic component industry.

The disruption in the supply chain due to the COVID-19 pandemic has hit India’s electronics industry hard, leading to a massive shortage of parts and components. More than 70 per cent of the components used in assembling electronic products are imported from China and countries like Malaysia, Korea and Taiwan. It is reported that the imports of electronic components from China declined from ₹ 62.65 billion in FY18-19 to ₹ 47.17 billion in the April-February period of FY19-20. However, the share of China in overall electronics imports grew from 55 to 75 per cent over the same period. In fact, China has been considered the factory of the world as far as electronics is concerned. What is adding to the existing supply chain bottlenecks is the clarion call for boycotting Chinese products amid India-China border tensions and the anti-China sentiments escalating across the country. The Indian government has initiated manual checking of Chinese cargo at ports and airports and detained Chinese consignments, leading to a backlog in supplies of many electronics products and parts. Because of the delays in getting clearances for these imports, meeting the demand of the manufacturers and distributors is still a far cry at the moment. Mobile device manufacturers, PC makers and telecom equipment players, among others, have been severely impacted by these developments as they rely on the imports of components along with finished products from China.

Meanwhile, efforts are under way to aggressively focus on self-dependency. However, looking for an alternate source to mitigate the supply and demand imbalance immediately is far from feasible, and the situation is likely to stretch for a long period with the challenges posed by COVID-19 coupled with the ban of Chinese products. On a positive note, the Indian government’s push for a self-reliant India or ‘Atmanirbhar Bharat’, by promoting the production of local goods at a cheaper price to ease the heavy reliance on China, is an encouraging initiative. Experts feel that this trying time is a blessing in disguise, as it compels the government to focus on local manufacturing, as well as act as an import monitoring mechanism to address the existing disabilities in the electronic component industry.

The current scenario in the electronic component industry
The entire electronic component market has been negatively impacted by the COVID-19 pandemic. There is a disruption in supply chains, higher prices for some components, shipment delays for electronics manufacturers and distributors, extended lead times, etc. In India, the demand for components is the highest from the industrial electronics sector, followed by consumer electronics and the LED lighting industry. The component demands from the automotive industry are also significantly high. The disruption caused by COVID-19 has led to a major demand-supply gap in the Indian electronic components market with respect to domestic manufacturing. The effects were felt in March and April this year, with strict lockdowns across the world and many countries putting restrictions on movements across borders. However, the gradual relaxation of the lockdown and reopening of the economy has slightly changed the current demand and supply scenario of electronic components. Yet, the current situation is still unpredictable and unprecedented amid India-China tensions and coronavirus-induced restrictions.

Anil Bali, vice president, Deki Electronics Ltd, says, “We have to break the scenario into two parts. One is the effect of COVID-19 and the other is the call for boycott of Chinese products. Most factories started working from mid-May. At that time, the demand was very low as everybody was being extra careful and working with 25 per cent workforce. In June, this was increased to 50 per cent and by end July we are seeing demand going back to pre-COVID levels. Component suppliers have been ramping up their production as per demand and now most component manufacturers are working at 100 per cent capacity.”

He adds, “The PM’s call for Vocal for Local and Atmanirbhar Bharat has made some impact. We are being approached by both local manufacturers and MNCs who were earlier importing capacitors from China or elsewhere. We are in the process of getting our samples approved. Going ahead, this is a good sign for both the equipment manufacturer and the component manufacturer.”

Since India is heavily dependent on China for components, it will take some time to reduce its reliance on that country. At present, the demand is outstripping supply in the electronic component market. Therefore, it is important to create an ecosystem for components with more focus on local manufacturing as an alternative. Parul Saini, business development and sourcing head, Singodia Electronics Private Limited, rightly says, “The COVID era was an eye-opener for all Indian manufacturers and distributors, as it made us realise that we need to be more vocal for local rather than focus on imports, and look at better pricing and immediate delivery.”

As India has very few indigenous component manufacturers, the industry cannot still do without Chinese suppliers. Saini says, “The government needs to invest more to boost the electronic component industry in the long run. The political sentiment against China has called for a boycott of Chinese products, offering a huge opportunity for India to start focusing on local manufacturing. Chinese arrogance has changed our mindset, and many Indian manufacturers are fine with shifting to suppliers other than Chinese.”

The total effect of this pandemic cannot be ascertained until it is over. However, the Indian market remains resilient and is seeing a good recovery as the economy opens up, says Sandeep Aurora, vice president, IESA. He explains, “The call for India being ‘Atmanirbhar’ could not have come at a better time. As we move towards becoming the third largest economy in the world in the next few years, we have to embed ourselves into the global supply chain, and this wake-up call will make that transition faster.” 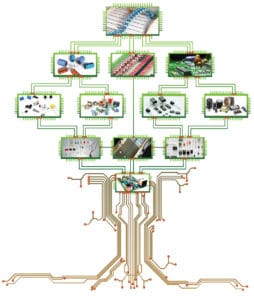 The impediments
The Indian electronic component industry is currently in a state of chaos because of the bottlenecks in the supply chain from China. After the face-off between the Indian Army and China’s PLA troops in the Galwan Valley in Ladakh, the decision of banning Chinese products has caused serious distress to the industry. Indian OEMs, who were dependent on China for components, are at the crossroads.

The lockdown in India and other countries due to COVID-19 disrupted the entire supply chain for almost 3-4 months. All the international shipments were put on hold or delayed, and air and sea freight charges increased exceptionally. Saini says, “We have to bear heavy freight charges and long lead times to keep our businesses running during this pandemic. The market was very slow during the unlock period, but frequent lockdown relaxations have brought some relief to many businesses.” However, she cautions that all the businesses are still running at limited capacity as many migrant workers have shifted back to their native places. The other challenges most businesses are facing are shortage of manpower, delayed payments from customers, slow market demand, containment zones on the rise and frequent lockdowns, high employee and office expenses, delayed deliveries, holding of Chinese shipments amid rising tensions between India and China, and following guidelines for taking precautions during the pandemic.

However, Aurora states, “There were initial supply side issues and some demand side issues remain, but the overall sentiment remains strong and we are sure that the pent up demand will nullify the small blip the industry saw.”

A challenge in the current situation is that finding new suppliers for components or advanced technologies is not an easy process. The task is time consuming, and involves huge capital spends and massive investment. Many industry experts anticipate that it will take at least a few years to develop an entire ecosystem of components in India.

The Indian government should step up its efforts
India is yet to create a strong foothold in component manufacturing, which is key to making electronic devices. The potential of localisation of components is not promising enough at the moment. Therefore, it is extremely important that the Indian government provides constructive impetus to develop an ecosystem for manufacturing components with higher domestic value addition. The government must address and provide solutions to the high cost of manufacturing with cheaper sources of capital, and also improve port infrastructure and logistics. It should roll out a clear road map regarding policies and rules to promote local manufacturing to achieve a China-free market.

The government recently launched schemes to give a positive stimulus to the electronics manufacturing sector. The schemes include Production Linked Incentive (PLI), Scheme for Promotion of Manufacturing of Components and Semiconductors (SPECS) and Modified Electronics Manufacturing Clusters (EMC 2.0), eyeing a rapid increase in electronics manufacturing by 2025 and creating an additional 1.5-2 million new jobs in the short term.
Bali says, “The government has been most proactive. It has come out with a number of schemes to help the MSMEs and other businesses. In the Production Linked Incentive (PLI) scheme, the government is willing to give you a five per cent incentive if you invest in capex over four years. Under the Scheme for Promotion of Manufacturing of Electronic Components and Semiconductors (SPECS), which is an extension of the earlier MSIPS scheme, the government will give 25 per cent of the capital for your capex if you meet certain norms of increased production. Both these schemes will boost manufacturing in India, especially in the mobile phones segment.”

The new schemes are meant to benefit mobile manufacturing more. However, the government should also focus on sectors like medical, automobile, defence, etc. A study by NEC Technologies India Pvt Ltd and industry body ASSOCHAM states that the Indian government needs to introduce a phased manufacturing plan to encourage the production of electronic components. The report also states that just as domestic value addition has increased for mobile phones, plans and policies are needed to encourage the manufacture of electronic components, which are core to increasing domestic value addition.

According to Saini, the government needs to come with structural reforms and an immediate action plan for setting up a robust local supply chain, making India a reliable manufacturing hub of electronic components. She says, “First, we need to become price competitive with respect to the foreign suppliers. Certain taxes/duties/levies need to be identified and removed that increase the cost of production and make us less competitive. Second, we need to identify certain segments in electronic components where India has the capability to scale up and be globally competitive. We can also look for strategic alliances to increase our capability. Third, proper training and skill development programmes should be encouraged to generate employment. Fourth, domestic investments, FDI and production-linked incentives should be encouraged.”